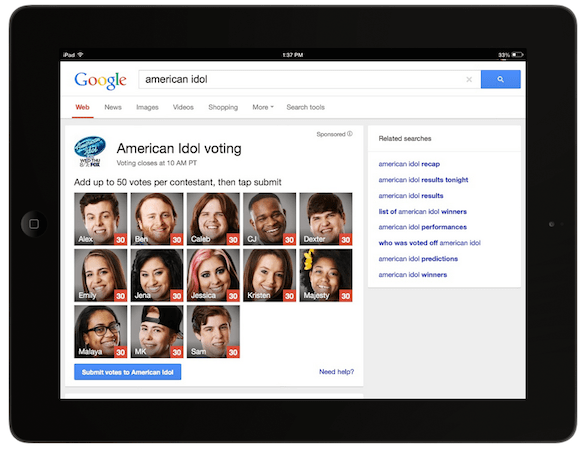 Expect tonight's American Idol to come with a bit of an internet twist. In an effort to mix up the type of interaction fans can have with the show, FOX has announced a new partnership with Google and Facebook. Now, each time an episode airs live, simply searching for "American Idol" will let viewers cast a vote right from Google's main site or its iOS and Android Search apps. Up to 50 votes per contestant can be submitted, so there shouldn't be any problems if you have a thing for more than a single Idol.

As for Facebook, FOX plans to include data from the social network during episodes of American Idol, such as real-time voting updates and conversations people may be having about the show. Bill Bradford, SVP Digital at FOX, says that the chance to collaborate with Google and Facebook was a no-brainer, as this is a great opportunity to better engage fans and make them "a bigger part of the show."

In this article: American Idol, American Idol voting, AmericanIdol, Facebook, Fox, Google, hdpostcross
All products recommended by Engadget are selected by our editorial team, independent of our parent company. Some of our stories include affiliate links. If you buy something through one of these links, we may earn an affiliate commission.