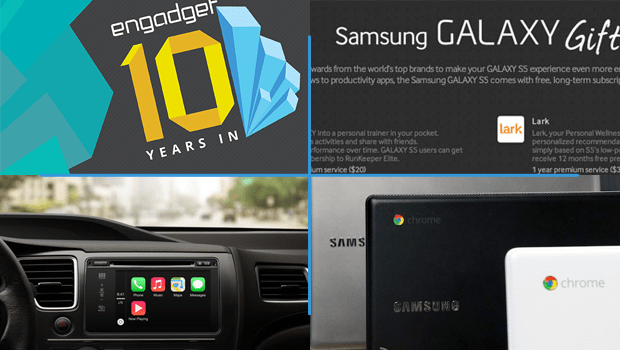 Since March 2, 2004, Engadget has been keeping people from all four corners of the globe in touch with the latest and greatest gadget news. And wow... what a ride it's been. Whether you're a casual techie or hardcore early adopter, we hope you'll join us in celebrating Engadget's 10th anniversary!

Apple announced its new in-car interface called CarPlay, which offers touch- and Siri-based navigation of services and apps available on Lightning-enabled iPhones -- including the likes of iHeartRadio and Spotify. Only a select few automakers are currently on board, but Apple says we can expect that to list to grow in the near future.

Looking to buy Samsung's new Galaxy S5? If so, you'll be happy to know the handset comes with a great selection of free, premium app subscriptions. Most of the limited-time services only extend a few months, but hey... who doesn't enjoy free stuff? Samsung's new Chromebook 2 comes in 11- and 13-inch flavors, starting at $320. Both models incorporate 2GB of RAM, Bluetooth 4.0 and a year's worth of free AirDroid service. What's more, the 13-incher packs a lid covered in faux-leather similar to that of the Galaxy Note III.

In this article: app, app subscription, apple, apps, carplay, chrombook, engadget birthday, engadget10th, galaxy gifts, google, samsung, samsung chromebook 2, tdr
All products recommended by Engadget are selected by our editorial team, independent of our parent company. Some of our stories include affiliate links. If you buy something through one of these links, we may earn an affiliate commission.