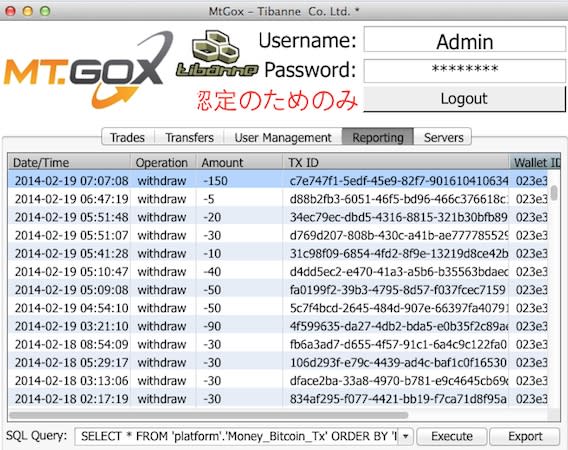 The latest twist in the fall of Bitcoin exchange Mt. Gox is here, as CEO Mark Karpeles, personal blog, MagicalTux.net (along with his Tumblr and Reddit accounts) has apparently been hacked. Whoever has control now used them to post a "MtGox2014Leak.zip" that claims to show "relevant database dumps, csv exports, specialized tools, and some highlighted summaries compiled from data." We wouldn't recommend downloading the file or running its included executable (pictured above, it claims to be from Mt. Gox parent company Tibanne Ltd.), but some already have. Several posters on Reddit and Twitter report they've verified their personal account balances with the data in it -- also available as an Excel spreadsheet -- tied to the user id included in their first Mt. Gox registration e-mail.

Update: No one has commented on the database leak, but Mt. Gox has updated its website tonight with a spam warning (PDF) claiming that phishing emails are being sent to former users. Considering that personal details may be among data loosed from the exchange's servers, if you used the same password on MtGox.com and other sites, we'd recommend changing it right away.

If the leaked information is valid (and, if valid, accurate, considering Mt. Gox's vulnerability and accounting issues), it reports a sum of 951,116.21905382 Bitcoins deposited by users. During a news conference in Japan, Karpeles claimed 850,000 Bitcoins (worth around $549 million at current prices) had disappeared due to "weaknesses in the system," while bankruptcy filings claimed a debt of $63.6 million. How many Bitcoins were really left in the vault, what happened to the rest and whether or not account holders will ever get their currency back is still unknown.

Forbes points out a (now deleted) forum post that offered a 20GB Mt. Gox database file for sale at a price of 100 Bitcoins. The poster claimed it holds personal details and even passport scans of the site's users, which only adds to the concerns of anyone who had an account before the exchange shut down last month. Meanwhile, Bitcoin watchers have noticed $113 million in coins linked to Mt. Gox accounts moving through the blockchain (check out our Primed article to find out how mining and transaction verifications work) recently, which Coindesk suggests could be preparation to use them "for a high volume of transactions."

In this article: bitcoin, database, hack, leak, markkarpeles, mt.gox
All products recommended by Engadget are selected by our editorial team, independent of our parent company. Some of our stories include affiliate links. If you buy something through one of these links, we may earn an affiliate commission.