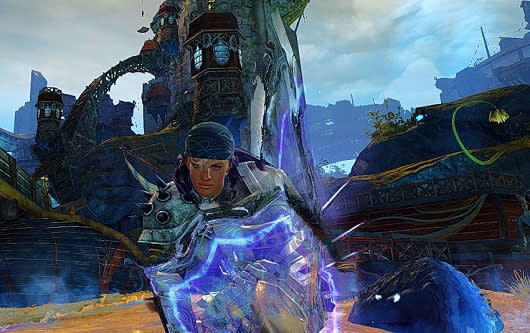 I've been critical of Guild Wars 2's living world over the past year. It was an experiment that I thought sounded excellent on paper but hadn't proved itself in practice. ArenaNet's goals for the story were very ambitious, but most video game fans -- and MMO players especially -- are used to developers talking up lofty plans and then delivering products that don't quite leave the ground. These days it's easy to let go of some disappointment if we're promised a flying car and instead get a new four-door sedan that actually works as opposed to, say, a Biturbo that rattles apart on the highway. GW2 at launch was at least airborne, and it had a good foundation to build on. The question was whether or not ArenaNet would build on it.

Now that we've seen the last part of the first living world story arc, I am ready to tentatively classify GW2 as being in the "hovering" stage of flight. Jump past the cut and let's talk about Battle For Lion's Arch -- but only if you're cool with spoilers. Are we cool with spoilers? Cool.

If you can't behave, I'll turn this giant drill ship right around

Escape From Lion's Arch was well-received overall, but Battle For Lion's Arch is more of a mixed bag. As grand finales go, it hasn't done a whole lot to set itself apart from the previous release. Blasting Lion's Arch to smithereens is a hard act to follow, but the impact of the finale was front-loaded into Escape From Lion's Arch. Battle For Lion's Arch feels like cleanup work in comparison, as it lacks the heroism and desperation of saving citizens and watching the invasion occur. Apart from the major bosses, the environment and enemies are pretty much the same as they were two and a half weeks ago. And while it was a great idea to give us the opportunity to see the end of the story without having to go through the lengthy and challenging Scarlet fight, it's a problem that wouldn't exist if beating up Scarlet weren't such a pain in the Asura gate. This is very, very unfortunate because if the events scaled better, they would be wonderful; as it stands, they're overtuned for small groups, buggy, and open to leeching loot and achievements.

It's rare that I find myself skipping parts of an encounter -- and parts of the story -- to jump ahead and see the end, but I haven't yet worked myself up to go back and defeat Scarlet's hologram after an excellent attempt was thwarted by her bugging out and turning permanently invulnerable. I think that this release was a laudable attempt at turning the final fight of a season into an open world encounter, but the kind of organization and cooperation that worked so well for the Twisted Marionette fight is far more difficult to sustain when it spans an entire zone and several layers of boss fights. Now that ArenaNet has gotten the hang of creating challenging open world encounters, the next step should probably be to re-emphasize GW2's community-driven approach to gameplay.

This is going to become increasingly important to nail down because Scarlet has succeeded in getting the attention of a large, toothy neighbor, and I doubt that it's going to come strolling over for a cup of sugar and some small talk now that it's awake. I could be wrong! Maybe it's a nice dragon. Maybe we'll be friends. Maybe this will herald the dawning of a new era of cooperation between dragons and Tyrians. Maybe we're about to witness some Dinotopia scenario where it helps us rebuild Lion's Arch. Maybe the great celestial phoenix will fly out of my nose. All aboard the dragon wagon

The animated cinematic that followed Scarlet's defeat and death is stunning, and I've probably watched it 10 times already. I liked Scarlet, although these last few updates have had to make up for somewhat thin characterization until now. If she had been this intense and clearly tormented from the beginning, I think she would have been better received by players; according to comments from the writing team, Scarlet's personality change was significant, but if she was on a downward spiral, it's odd that she seemed more together and dangerous from The Nightmares Within onward. The short story What Scarlet Saw got inside her head a bit but gave little indication of the loneliness and complex emotions toward Omadd hinted at in Origins of Madness and Edge of the Mists. It's unfortunate that we really got to know her and find out the most compelling things about her only right before it was time to finish her off for good.

I'm not going to discuss the whys and wherefores of Scarlet's plan or the identity of our new dragon friend, Scales McGee, until ArenaNet directly confirms it; we've still got an epilogue coming up on March 18th, which will wrap up some of the outlying story details. We can be pretty certain, however, that we've got ourselves a new big bad, and it sure doesn't look like Primordus, Kralkatorrik, Jormag, or Bubbles.

The fandom's perception of whether or not dragons are a good thing for the game has changed quite a bit since launch. I've always been sort of iffy on dragons as an enemy myself; Zhaitan was really cool-looking, but the final battle against it was infamously underwhelming, and the dragon itself never appeared enough to be truly menacing. The idea of Elder Dragons as forces of nature beyond good and evil and with minds outside of our realm of understanding is pretty neat, and I infinitely prefer it to having a big lizard inexplicably channeling Cruella de Vil, but we also never really saw Zhaitan do anything. We saw the effects of its power and interacted with its minions, but it was hard to feel super invested in something that barely realized we were a threat until we were all but doing the Batusi on its doorstep.

If there was one unifying theme in criticism of the first living world season's story, it was probably the fear that ArenaNet was leading us all on a tangent and that nothing it wanted us to be invested in would have any real payoff down the line. It was hard not to wonder if the main story had been suspended, especially amid comments that seemed to indicate an unwillingness to disrupt the flow of the personal story. At the time I was told about the last four season one releases, I was unsure which direction the story was headed in, and I was frustrated at how detached most of it seemed to be from GW2's already extensive established lore. The looming threat of Puff the Magic-Devourer was enough to make even me -- a less than avid dragon fan -- feel some relief. It meant that the living world story was not simply a filler arc meandering its way to a neatly self-contained conclusion.

My hope is that ArenaNet will take a subtle approach to our dragon pal and perhaps confirm the existence of a dark sentience with a compelling personality and motivations. Scarlet became more interesting -- and well-liked -- when players had a definite indication that she wanted something more concrete than to sow chaos. She seemed to be under the impression that awakening the dragon was somehow necessary, and through her journal and the information uncovered in A Study in Scarlet, we can probably conclude that Scarlet at least was able to assign some kind of personality to the thing whispering in her head.

I don't expect (or want) a dragon that's not dedicated to destroying life on Tyria as we know it, and I don't think we're likely to get a "good" Elder Dragon that secretly wants what's best for us, as some fans have suggested. What I do hope we get is a charismatic dragon, who may not have a valid point but is capable of making the audience wish that it did. An evil that sincerely promises something of high emotional value -- such as love, freedom or security -- is interesting because it can encourage audience investment without needing a moral leg to stand on. The most fascinating and frightening part of Zhaitan's corruption wasn't its power to command mindless servitude but the way in which many of its more powerful minions seemed to have had existing devotion twisted to replace the original subject -- whether the Six Gods or even the Krytan throne -- with Zhaitan.

One thing is certain, either way: Scarlet arguably won. She may have died in the attempt, but at most the main cast escaped with their lives. The Breachmaker completed its task, and things are potentially about to get a whole lot hairier. Or scalier. Whichever. I bought my mom her own copy of GW2 this weekend, and so far she's enjoying her Sylvari Ranger. Like me, she played World of Warcraft for several years before becoming disenchanted with it, and she found GW2 attractive for many of the same reasons I do. Hearing an entirely new player catch on very quickly to the goals behind the living world concept without having been exposed to any sort of official marketing was heartening: When my wife and I explained that the world changes and leaves marks on the world, Mom lit up. "Oh," she exclaimed, "it's got a history, like real life!"

Shortly after I was told the major plot points of the living world season one finale, ArenaNet's Colin Johanson asked me if that was the kind of thing I envisioned when I thought about what a living virtual world could be. I told him yes, although at the time I still wasn't sure how ArenaNet would pull it off. Despite some hiccups along the way, I feel much more confident now that the living world concept will work out well for GW2 in the long run, provided that where we are now is viewed as an excellent start.

How have you found the season finale? Are you looking forward to season two, or are you just glad we're that much closer to the long-anticipated feature patch? How many of you are scrolling down to the comment section in frustration to type "IT'S MORDREMOTH"? Have at it, and I'll see you in the Mists!

Anatoli Ingram suffers from severe altitis, Necromancitosis, and Guild Wars 2 addiction. The only known treatment is writing Massively's biweekly Flameseeker Chronicles column, which is published every Tuesday. His conditions are contagious, so contact him safely at anatoli@massively.com. Equip cleansing skills -- just in case.
In this article: anet, arenanet, battle-for-lions-arch, buy-to-play, colin-johanson, elder-dragon, escape-from-lions-arch, fantasy, featured, flameseeker-chronicles, guild-wars, guild-wars-2, gw, gw1, gw2, lions-arch, living-world, lore, ncsoft, opinion, scarlet-briar
All products recommended by Engadget are selected by our editorial team, independent of our parent company. Some of our stories include affiliate links. If you buy something through one of these links, we may earn an affiliate commission.