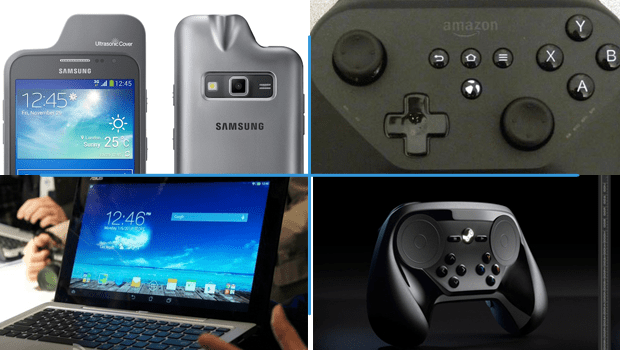 It looks like Amazon might finally be building its rumored set-top box, and this is probably the controller that will come along with it. Thanks to Dave Zatz, photos of the rather chubby handset were uncovered from the Brazilian FCC. All in all, it's got all your standard gaming functions, with the addition of a few Android controls and what appears to be an Amazon Game Circle button. Samsung announced that it's bringing three new accessories to its low-end Galaxy Core Advance smartphone that are designed to help the disabled or visually impaired: the Optical Scan Stand, Voice Labels and most impressively, the Ultrasonic Cover. By using the latter, the Core Advance can detect objects or people in a 2-foot radius and provide vibrational feedback or spoken alerts.

Here's a much clearer look at Valve's new Steam Controller

Valve released the first prototype Steam Controller toward late last year, and now it's given us a much better idea of what the final product will look like. When compared to the older version on the right, you'll notice the newer model lacks the touchscreen, but adds several buttons in its place. What's special about the ASUS Transformer Book Duet TD300? It runs both Android and Windows operating systems in the form of a laptop or tablet. However, this interesting hybrid may never see the light of day due to contention from Microsoft and Google.

In this article: Amazon, Android, Asus, Engadget, Google, Microsoft, Microsoft Windows, Samsung Group, SciTech, tdr, Ultrasound, Valve Corporation
All products recommended by Engadget are selected by our editorial team, independent of our parent company. Some of our stories include affiliate links. If you buy something through one of these links, we may earn an affiliate commission.