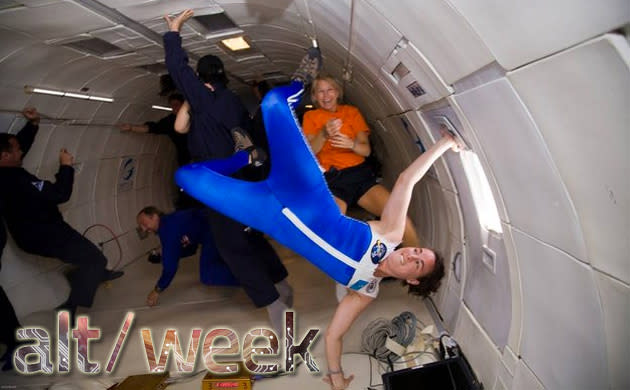 We're not saying medicine is jumping on the bandwagon, but a new camera could usher in the era of the "inner selfie." What's more, astronauts are getting the 70's sci-fi fashion they deserve, and Venus shows off its glory. This is alt-week. 2014 might go down as the year of the selfie thanks, to a certain picture taken at a little shin-dig. But if you ask a team at Georgia Tech, it's actually the year of the inner selfie. Why? Because it's recently taken the wraps off its latest creation: a tiny camera that can shoot high resolution 3D pictures inside the human body. However, it's not quite like the shooter on the front of Bradley's Galaxy Note 3, in fact the team's device doesn't have a lens at all. Instead, it uses ultrasound and an array of sensors to relay data back to a video monitor, which then presents the information in visual form. It's not the first camera to work this way, but it's certainly the first small enough to be used safely in human arteries and blood vessels during surgery. The tiny camera has been designed to be extremely power efficient too, shutting down sensors when not needed so that it's average power requirement is just 20 milliwatts. More importantly, this stops the camera getting too hot while in use, and harming (potentially fatally) its host. The device still needs to be trialled, and ultimately seek FDA approval, but already the team is working on a smaller version that could be mounted on a 400-micron diameter guide wire! If you're an Engadget reader, we're going to go out on a limb and guess that when you were younger "astronaut" was fairly high on you list of acceptable future jobs. Heck, maybe it still is. If part of the attraction of the gig (apart from, you know, all that obviously cool space stuff) was donning the iconic chunky space suit, then you might want to get that application form off to NASA stat. Why? Because a forthcoming, and frankly less childhood dream-worthy skin-tight outfit could be the astronaut's future fashion preference. The new suit isn't about surviving space walks, or looks (of course), it's about preventing some of the effects that Zero G can have on the human body in day to day living. Common issues include expansion of the spine (by up to three inches in come cases) and wasting muscles due to the lack of resistance. The "Gravity Loading Countermeasure Skinsuit" is tight and stretchy, and it's designed to emulate the more familiar force of One G on the body. European Space Agency astronaut Andreas Mogensen will be the first to test out the new kit in 2015, with the UK's Tim Peake potentially donning it during his forthcoming time on the ISS. And you thought we'd have to wait until the 25th century for fashion like this? We're all familiar with the wonder that is a rainbow. But, what about a 'glory'? Well, that's what you are seeing above, in images captured by the ESA's Venus Express orbiter. Glories occur in a similar way to rainbows -- light being refracted/reflected through water -- but require special conditions: spherical clouds comprised of equally-sized droplets, with the sun shining through them head on. This particular glory occurred about 70 kilometers above the surface of Venus, and measured some 1,200 kilometers across (about 750 miles) as observed by the craft that photographed it. Quite a trek to find that -- we assume extra large -- pot of gold then.

In this article: alt-week, AltWeek
All products recommended by Engadget are selected by our editorial team, independent of our parent company. Some of our stories include affiliate links. If you buy something through one of these links, we may earn an affiliate commission.