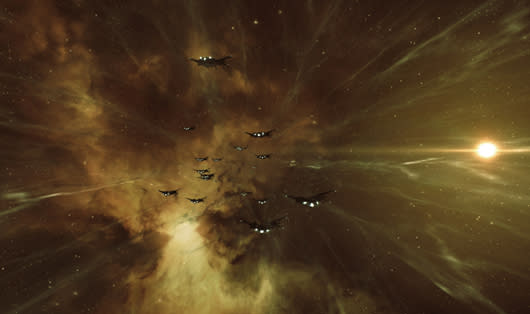 CCP recently released an official statement condemning out-of-EVE harassment. In that same statement, though, the company said that in-game bad behavior is not only acceptable but essential to its version of a sandbox.

The separation between player and player character is a common sentiment among MMO fans, of course, whether you're a griefer, a raider, or a roleplayer. What say you, Massively readers? Do you try to separate your in-game and out-of-game behavior, or are you the sum of your actions in both virtual worlds and meatspace?

Every morning, the Massively bloggers probe the minds of their readers with deep, thought-provoking questions about that most serious of topics: massively online gaming. We crave your opinions, so grab your caffeinated beverage of choice and chime in on today's Daily Grind!
In this article: ccp, ccp-games, daily-grind, eve, eve-online, griefing, internet-spaceships, opinion, sandbox, sci-fi, spreadsheets-online, tdg, the-daily-grind, you-are-what-you-do
All products recommended by Engadget are selected by our editorial team, independent of our parent company. Some of our stories include affiliate links. If you buy something through one of these links, we may earn an affiliate commission.