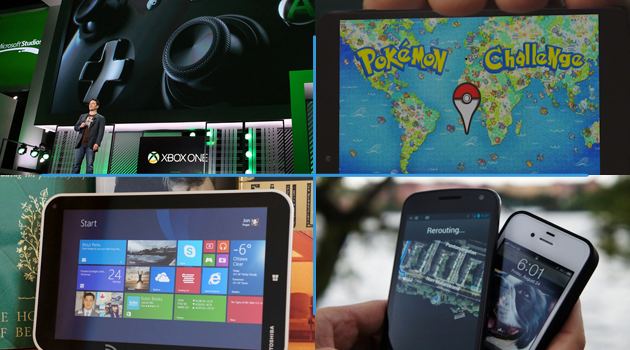 Today, Microsoft announced that longtime employee Phil Spencer is replacing Marc Whitten as head of the Xbox division. What does this mean for the future of Xbox's current brand reorganization? Well, we managed to speak with Phil about just that. Toshiba's 8-inch Encore may not be the fastest or prettiest Windows tablet on the market, but it gets the job done. For $285, you'll get 32GB of memory and satisfactory battery life. The rear camera, however, leaves much to be desired -- even for a low-budget device. Read on for our full review. Google chooses you to become a Pokémon Master on April Fools'

Google has a history of elaborate April Fools' Jokes, but this year's may top them all. Welcome to the "Pokémon Challenge," the "latest" build of Google Maps. Hurry and catch them all before 2pm PT on April 2nd. Samsung and Apple just can't seem to get along. The latest news surrounding the ongoing legal battle has Cupertino seeking $2 billion in damages from the Korean manufacturer for infringement on five patents. What's more, Samsung plans to use Google engineers as witnesses.

In this article: apple, april fools, encore, google, intel edison, phil spencer, pokemon challenge, samsung, tdr, toshiba encore, ultrakam, xbox, xbox one
All products recommended by Engadget are selected by our editorial team, independent of our parent company. Some of our stories include affiliate links. If you buy something through one of these links, we may earn an affiliate commission.