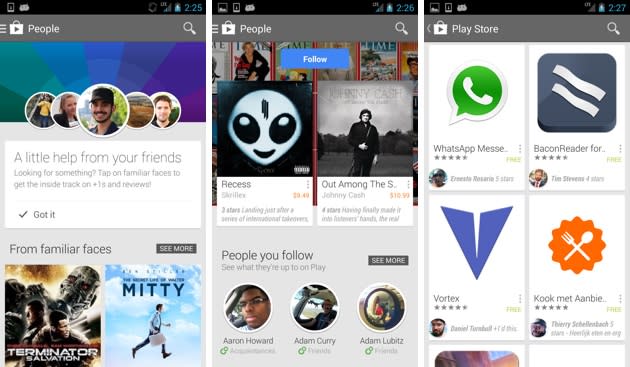 You trust your friends for restaurant recommendations, so why not apps as well? That's the idea behind Google Play's new "People" section, which attempts to leverage Google+ as a way to show which apps your friends like enough to award a +1 (you'll be able to see their ratings on those apps too). And it's not just restricted to your buddies either; the section will suggest other folks on G+ that you should follow to get even more app recommendations. The update should have rolled out to your Android handheld by now, but you can view the same reviews and ratings under the "From Familiar Faces" heading on the web store as well.

In this article: google, googleplay, mobilepostcross
All products recommended by Engadget are selected by our editorial team, independent of our parent company. Some of our stories include affiliate links. If you buy something through one of these links, we may earn an affiliate commission.