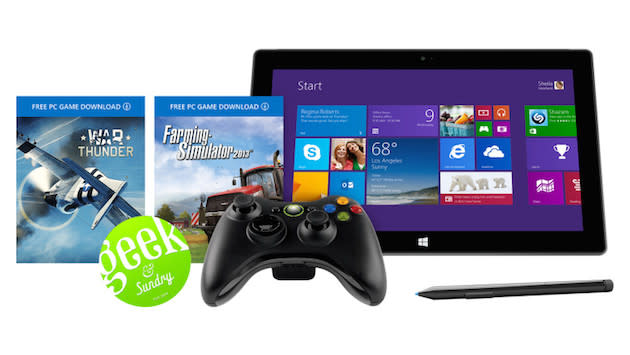 If you've considered the Surface Pro 2 to be more than just a portable workstation, then Microsoft's latest tablet bundle might pique your interest. In collaboration with online culture show Geek & Sundry, the company has quietly pushed live a new gaming deal on its virtual store in the US and Canada that throws in $105 worth of free games and accessories. For $899, the price of the base 64GB Surface Pro 2 model that's already included, you'll also get a wireless Xbox 360 controller and two games: Farming Simulator 2013 and a premium pack for free-to-play WWII flying simulator War Thunder. To be clear, neither title will vie for any upcoming gaming awards, but you can't argue with free, right? Microsoft intends to run the offer until May 1st or until stocks run out, whichever comes sooner, so if you've been waiting for the right opportunity to grab yourself a Surface Pro 2, now might be the time to click in.

In this article: microsoft, microsoft store, surface, surface pro 2, tablet, xbox 360 controller
All products recommended by Engadget are selected by our editorial team, independent of our parent company. Some of our stories include affiliate links. If you buy something through one of these links, we may earn an affiliate commission.