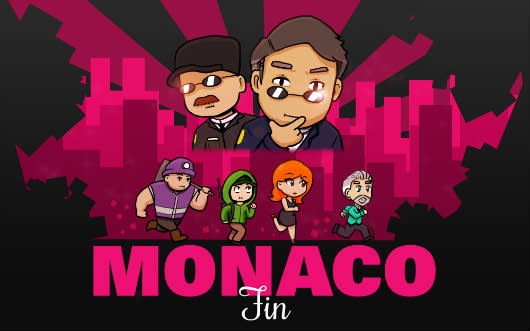 The final, free update to Monaco is live now, including the "brutally difficult" fourth campaign that finishes the Gentleman's story. The update is called Monaco: Fin, and it truly is the end of Monaco, at least in the sense of regular updates. Creator Andy Schatz describes Monaco's development story as follows:

"I designed Monaco on paper in 2003 when I was still an employee of a much bigger (now defunct) game developer. Development started in October of 2009. Andy Nguyen joined the team in May 2011. The game launched in April 2013. One year later, nearly a million copies of the game sold, and it's time to move on. It's time to bring something new into the world. It's time to start over. It's time for us to earn your attention again."

Schatz and his studio, Pocketwatch Games, is now working on Armada, an RTSMOBA with a series of twists to the genres. It's still early in development, but at GDC Schatz told us that his current concept places Armada in the warrior heaven of Valhalla, with players able to battle creatures across all of time, from dinosaurs to robots. That's not the final concept, but it was one Schatz said he'd been kicking around for a while.

"I want to do the thing with RTS that we did with Monaco, with the stealth genre, and that's constrain the control set in order to make the actual, physical interaction easy to pick up without limiting the complexity of the game itself," Schatz said. "Monaco's a pretty complex game, right? But there's one button and two analog sticks. It's accessible – not accessible in a way that's for casuals. It's something you can just jump into and instantly start addressing the game design, rather than the physical interaction."

Monaco is 75 percent off on Steam this weekend, $3.75, through April 7.
In this article: Armada, mac, microsoft, monaco, pc, Pocketwatch-Games, update, xbox
All products recommended by Engadget are selected by our editorial team, independent of our parent company. Some of our stories include affiliate links. If you buy something through one of these links, we may earn an affiliate commission.