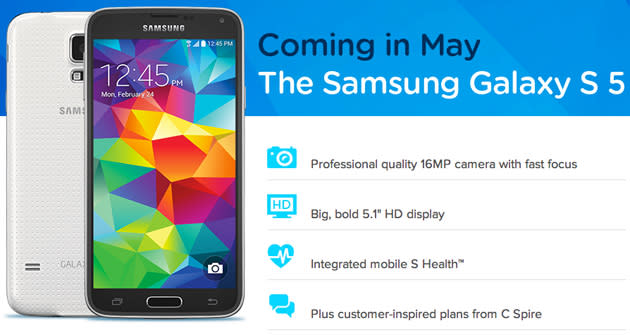 C Spire customers had to wait months after the initial launch to get the Galaxy S 4, but they won't have to be nearly so patient with the Galaxy S5. The southern US carrier has revealed that it will be carrying Samsung's Android flagship in May, just weeks after the biggest networks get their turn. While there's no mention of pricing so far, it won't be surprising if the GS5 costs the same $200 on contract that we've seen at the largest providers. The relatively quick launch may not have an immediate effect outside of C Spire's core markets, to be sure. Still, it suggests that Galaxy fans nationwide won't have to leave their favorite regional carriers just to get Samsung's latest and greatest in a timely fashion.

In this article: android, carrier, cspire, galaxys5, minipost, mobilepostcross, mobilepostmini, samsung, smartphone
All products recommended by Engadget are selected by our editorial team, independent of our parent company. Some of our stories include affiliate links. If you buy something through one of these links, we may earn an affiliate commission.