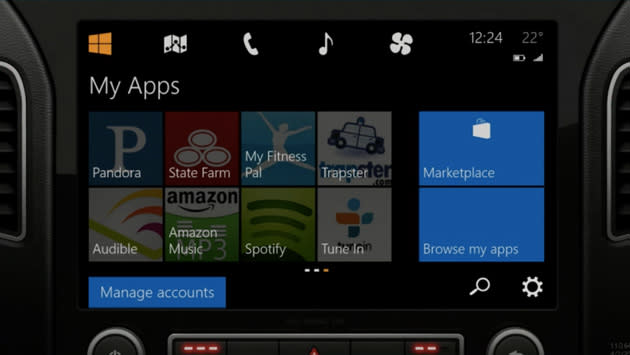 Microsoft has a home in the automotive world, but it doesn't have a way to bring a phone's interface to your car's infotainment system -- there's no Windows Phone equivalent to Apple's CarPlay. That might change before long, though. The software giant used a presentation at this week's Build conference to show off Windows in the Car, a conceptual platform that would adapt Windows Phone's apps and basic functions to in-vehicle interfaces. Not surprisingly, the MirrorLink-based tech looks like a cross between Microsoft's mobile and desktop interfaces; while you're running mobile apps, they get more on-screen buttons than usual to help you complete tasks faster and keep your eyes on the road. The software also focuses more on voice commands (Cortana is mentioned as a good fit), and it could eventually restrict complex app functions while you're driving. You might not get to add music to a playlist until you're parked, for instance.

Unfortunately, it's not clear how soon Windows in the Car might reach shipping vehicles, if at all. The crew in Redmond is testing code inside real cars and is comfortable with showing it to the public (see the source link's video at the 27-minute mark), so it's not just a pie-in-the-sky vision. However, the company also hasn't estimated availability or named car manufacturers that might be interested. While companies are working on MirrorLink-ready cars (Citroen, Honda, Toyota and VW) and head units (Alpine and Pioneer), that doesn't mean that you'll be controlling your Lumia with them as soon as they hit the streets. Given that CarPlay vehicles won't be available until later this year, it won't be surprising if any Windows in the Car implementations arrive sometime after that.

In this article: automotive, build2014, car, infotainment, microsoft, mirrorlink, mobilepostcross, transportation, video, windows, Windows Phone, windowsinthecar
All products recommended by Engadget are selected by our editorial team, independent of our parent company. Some of our stories include affiliate links. If you buy something through one of these links, we may earn an affiliate commission.