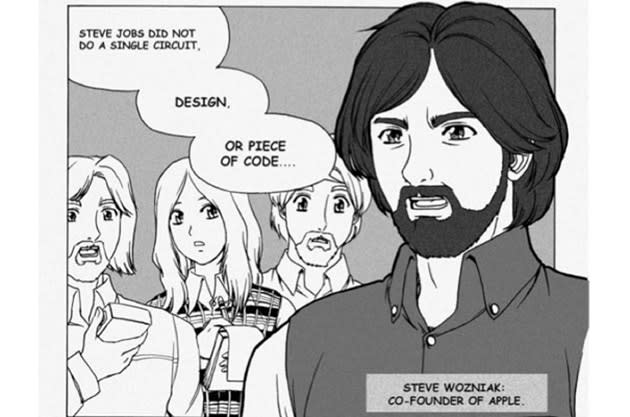 There's no doubt that Harvard's Business School is serious business, but its students are surprisingly learning about the history of Apple's two Steves through a non-traditional medium: manga. Professor Noam Wasserman has been teaching about Wozniak's and Jobs' friendship and eventual falling out for years as a cautionary tale. But, for the first time, he's using a more visual medium that portrays the two tech titans as smooth, baby-faced young'uns with big anime eyes as a supplement to the course's text. To be clear, it's not that Jobs manga you've likely heard of in the past. This particular Japanese-style comics is actually an adaptation of Wasserman's Harvard case study titled "Apple's Core," which tells the story of Apple's early days.

The one responsible for turning the study into a graphic novel, however, is another professor named Thomas Alexander, who got the idea during a stint teaching at a business institute in the Philippines. He realized that the story would resonate more with his students (who were mainly from India, China, Korea, the Philippines and Europe) if it were a lot more visual.

None of them had English as a strong suit. So I knew that to give them a 30- to 50-page written text, they will not read this. The participation will not be there.

That's why Alexander turned Apple's Core into a 30-page script and hired an artist to bring Apple's history to life. Wasserman, in turn, found it so intriguing, that he's now giving it out as optional reading material. If you're wondering, Harvard's MBA students seem receptive to the idea of learning from a graphic novel -- enough, at least, to grab all 20 copies Wasserman made last semester.

In this article: apple, education, harvard, manga
All products recommended by Engadget are selected by our editorial team, independent of our parent company. Some of our stories include affiliate links. If you buy something through one of these links, we may earn an affiliate commission.