Ask Massively: The one where we talk about our 2012 awards 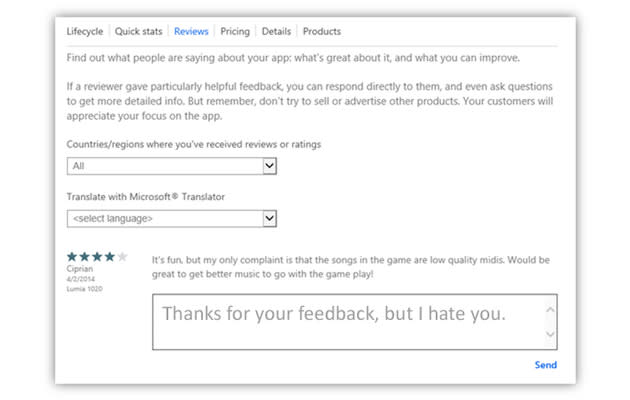 If a Windows Phone app disappoints you, it's probably right that you call out its failings and warn others to steer clear. Don't be surprised, however, if the minds behind the software start responding to your gripes directly. Microsoft is slowly rolling out a program whereby developers can comment on your reviews of their handiwork. Fortunately for you, however, the devs won't get access to your personal details, and, if they overstep the mark, you can report them for poor conduct. Still, the notion that coders will now get the chance to openly gain feedback from users seems like a step in the right direction -- just as long as everyone remains civil.

In this article: Comment, Developer, Feedback, microsoft, mobilepostcross, Store, Windows
All products recommended by Engadget are selected by our editorial team, independent of our parent company. Some of our stories include affiliate links. If you buy something through one of these links, we may earn an affiliate commission.