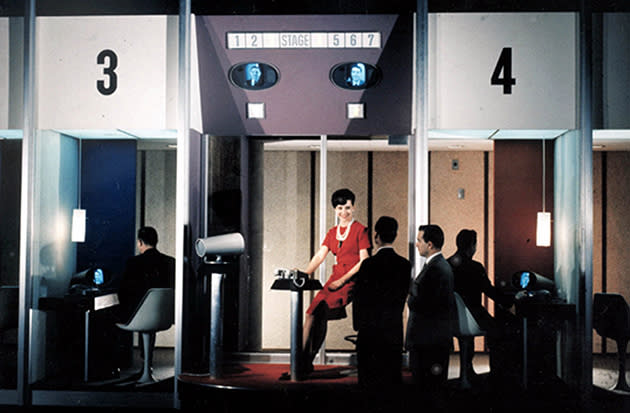 It seemed like the inevitable future at the time, we're sure. On April 20th in 1964, Bell Telephone showed off the Mod 1 Picturephone -- a precursor to the Skype and Hangouts video calls that have become a standard but under-utilized feature of modern communications. The demonstration was part of the World's Fair in Flushing Meadows, visitors were able to step into a booth and have a conversation with a person thousands of miles away in Disneyland. But instead of just talking into a handset, users sat in front of an oblong device that housed both a video screen and a camera. The service delivered a 30 frame-per-second black-and-white feed to wowed Fair-goers. A few months later, in June of the same year, AT&T took the service commercial.

Of course, as we all know the service was a flop. At $16 for three minutes of video calling, Picturephone was prohibitively expensive. Despite pumping millions of dollars into the effort, Bell could never get any traction. Mod II released in 1969 also failed to capture anything more than the imagination and a corporate videoconferencing descendant also proved to be too costly. Others tried and failed as well, it wasn't until decades later that Skype finally seemed to make video calling a practical proposition. Still, if you're wondering where the whole thing got its start, you need look no further than Queens, just a few minutes walk from where the New York Mets make their home.

In this article: ma Bell, picturephone, video calling, worlds fair
All products recommended by Engadget are selected by our editorial team, independent of our parent company. Some of our stories include affiliate links. If you buy something through one of these links, we may earn an affiliate commission.