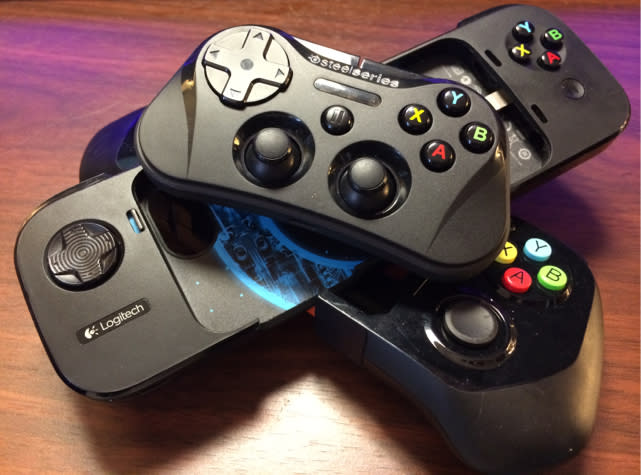 Made-for-iPhone (MFi) game controllers are pricey niche products, but some games greatly benefit from them. Many others haven't yet jumped on the physical button bandwagon, but some of them definitely should. Here are ten great games that would be even greater with a physical controller. Minecraft - It's hard to believe that this amazing sandbox title hasn't yet adopted MFi support. Playing Minecraft with a touchscreen is doable, but it's definitely not ideal. Real buttons for movement, block placement and jumping would be a dream come true. Trials Frontier - The lack of controller support here is almost inexcusable. Trials is a game that demands precise controls in the harder levels, and touchscreen buttons are anything but precise. I can't imagine a reason why the developers wouldn't have included an MFi option from the start, but it needs to be added as soon as humanly possible. Farming Simulator 14 - Maneuvering your bulky farm equipment around on an iPhone screen is a lot of fun, but vehicles would feel more real with the option of a real controller. Adding MFi support would also free up screen real estate used for the throttle and other controls, which would make the game even nicer to look at. Crazy Taxi - Come on, Sega! Virtually every other Sega title on iOS features support for game controllers, but this arcade driving game -- which desperately needs slick controls -- has been left out. Goat Rampage - This quirky sandbox game is as goofy as it gets, but the controls leave something to be desired. Adding a game controller would fix this and make the game even more absurdly fun. Slayin - Ok, I get it: The on-screen control pad is part of the experience. Still, I'd be willing to sacrifice the nostalgic virtual control pad in favor of some responsible physical buttons. Ultimate Mortal Kombat 3 - A fighting game on a touchscreen? It works OK, but any fighting game fan knows that physical buttons are superior in every way. Tapping up a fast combo is made a lot easier and more enjoyable when you don't have to guess where the buttons are. Carmageddon - This ultra-violent racing game didn't launch with MFi support, which kind of bummed me out, and it hasn't been added in yet either. I just can't swerve to avoid (or hit...) pedestrians with precision unless I have a fancy analog stick or d-pad. Call of Duty: Zombies - First person shooter fans demand physical control due to the twitchy nature of the games. MFi support was added to Call of Duty: Strike Team, but it's strangely be left out of updates for older iOS Call of Duty games. Earn to Die - The controls in this game are dead simple, and the on-screen buttons work as well as you'd expect, but I can't shake the feeling that it could be so much better. Landing your car perfectly and mowing through zombies is the name of the game, and I'd love to sit back with my SteelSeries Stratus and play the game on my iPad's big beautiful screen without having to touch it.

In this article: controller, controllers, games, gaming, mfi
All products recommended by Engadget are selected by our editorial team, independent of our parent company. Some of our stories include affiliate links. If you buy something through one of these links, we may earn an affiliate commission.