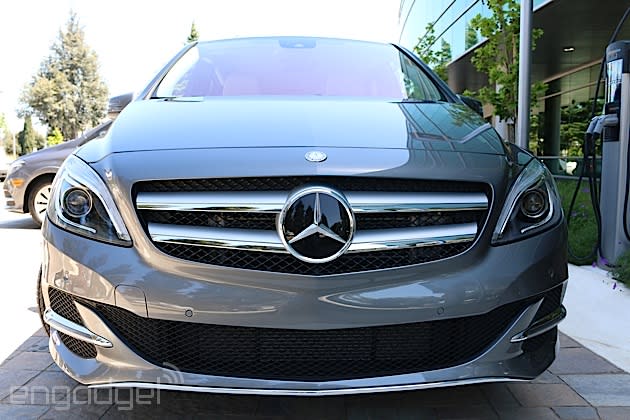 I shouldn't be imagining the sound of crickets when test-driving a brand-new Mercedes, but that's exactly what happened to me this week with the company's B-Class Electric. In this case, however, it's actually a good thing: The new US-bound EV, which should be hitting Stateside this summer for $41,450, is practically quiet enough for me to hear the nocturnal insects while driving. It's not going to be the most stunning car on the road, but as the first full-electric vehicle from Mercedes to hit US show floors, it's got enough appeal and oomph to be worth taking a closer look at. If the name sounds familiar, it's because it's based on the standard B-Class model, a compact vehicle currently featured in Europe. The Electric shares the same structural design, and is even built on the same assembly line. It's a front-wheel drive that comes equipped with a Tesla-made drivetrain and, as a result, offers 177 horsepower and plenty of torque.

Muscle's great, but the B-Class Electric sadly doesn't do much to reduce range anxiety. Boasting a 28kWh battery, the car has an estimated range of 85 miles on a full charge (compared to 100 on the BMW i3 and 103 on the RAV4), but you can at least get 60 miles if you leave it on a 240v charger for two hours; a full charge takes 3.5 hours. This likely isn't enough to satisfy any road-tripper, but it's ideal if you're not planning on leaving the city very often. As a sidenote, you won't be able to access Tesla's charging network, despite the company's influence on the car's drivetrain. (It can be charged from a standard 110v household charger, though this method will take between 28 and 30 hours.)

Muscle's great, but the B-Class Electric sadly doesn't do much to reduce range anxiety.

The car offers two modes: Economy and Sport. The former is focused on conserving power, so it takes longer to get it up to highway speeds; the latter gives you much more zippy acceleration off the line, and Mercedes says the B-Class Electric will get up to 60MPH in 7.9 seconds. And as I mentioned earlier, it manages to be punchy while staying incredibly smooth and quiet. During my 20-minute drive, I never felt like I had to compromise on comfort or utility by using an electric vehicle. However, in case you get in a really sporty mood, don't get any wild ideas -- the car's electronically limited to a max speed of 100MPH.

The B-Class Electric has a few different safety features (such as assistance for collision prevention, lane keeping, parking and blind spots), but one option that stands out is adaptive brake assist. This gives you three modes for braking, each with a different degree of kickback and energy regeneration. D+ coasts just like a regular automatic; D adds a little kickback to help you slow down faster without having to use your brakes; and D- is even stronger. This not only helps you brake more efficiently, but it also lets you boost power by converting kinetic energy into electric current, which ideally should add a few extra precious miles to your range. (This ought to be the most helpful if you're in the city and braking frequently.) There's a set of paddles on the back of the steering wheel you can use to switch back and forth between modes, and if you do it right, you could control the pace of your car this way if you're driving downhill.

Mercedes doesn't skimp on connectivity -- quite the opposite, in fact. In addition to the mbrace2 tech suite and DriveStyle setup, which adds iOS and Android compatibility to the 5.8-inch dashboard display through a special app (Pebble smartwatches are also compatible), it comes with remote monitoring features. You'll be able to access your car from a PC or smartphone to see how much of a charge it has or adjust the climate control a few minutes before you hop in the car. Overall, in terms of first impressions, Mercedes' first US attempt at an electric vehicle turned out pretty well.

In this article: b-class, boogieoogieoogie, electric, electricvehicle, ev, hands-on, mercedes, mercedes-benz, mercedesbclasselectric, mercedeselectric
All products recommended by Engadget are selected by our editorial team, independent of our parent company. Some of our stories include affiliate links. If you buy something through one of these links, we may earn an affiliate commission.