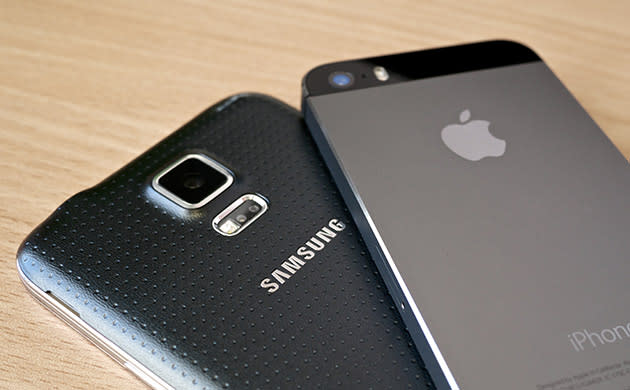 Here we go again. 2012's patent trial of the century -- which was all about whether certain Samsung devices were utilizing Apple technology without paying for it -- resulted in a billion dollar win for Apple. Yet, at the time we knew a second case, involving different patents and devices, was brewing on the horizon. The trial for that other case is finally over (almost), and the jury has rendered a verdict -- though there's still a damages issue regarding the Galaxy S II set to be decided on Monday, which could change the final damages tally. In general terms, the verdict's not a complete win for either party, as Apple owes Samsung $158,400 and Samsung will have to cut Apple a check for $119,625,000, a far cry from the $6.2 million and $2.2 billion the parties asked for, respectively. Why? Apple devices infringed one of two asserted Samsung patents, while Samsung phones and tablets infringed three of Apple's five asserted patents.

Update May 5,2014: The outstanding damages issues have been resolved by the jury, but the total amount Samsung owes remains unchanged.

Apple got a complete victory on patent number 5,946,647, as the jury found that all ten Samsung devices at issue infringed -- for the uninitiated, that list includes the Admire, Galaxy Nexus, Galaxy Note, Galaxy Note 2, Galaxy S II, Galaxy S II Epic 4G Touch, Galaxy S II Skyrocket, Galaxy S3, Galaxy Tab 2 10.1 and Stratosphere. That patent's for a technology that enables links clicked in one application to open other applications (like an address in an email opening up in a maps app). Apple was also successful with its famed slide-to-unlock patent (no. 8,046,721), but to a lesser degree: only some Samsung devices were found to have used it. Cupertino came up empty with two of its other patents: 6,847,959 (for universal search), 7,761,414 (for background sync). Patent number 8,074,172 (for word recommendation/autocomplete technology), was also at issue in the case, but presiding Judge Lucy Koh already found that Samsung devices infringed that patent on summary judgement back in January.

As with the conclusion of most every courtroom battle, we can expect there to be appeals filed on both sides, so the case isn't fully closed. However, this latest result has to have the folks in Seoul and Mountain View feeling pretty good. $120 million is just another line item in Samsung's mobile business budget, and the two patents Google agreed to indemnify Samsung against played no part in Apple's victory. Speaking of, while Apple certainly came out ahead on the monetary score card, it only received a fraction of the money it asked for, so it's safe to say that Tim Cook's probably not real thrilled with the outcome.

In this article: apple, apple vs samsung, applevssamsung, lawsuit, legal, mobilepostcross, patent, poll, samsung, verdict, wedgies
All products recommended by Engadget are selected by our editorial team, independent of our parent company. Some of our stories include affiliate links. If you buy something through one of these links, we may earn an affiliate commission.