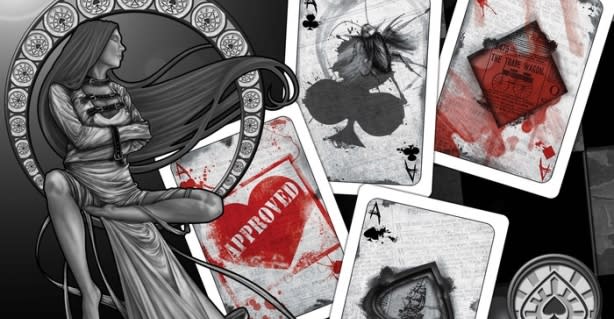 The state of Washington has filed a lawsuit against Altius Management, the company behind the successfully-Kickstarted Asylum Playing Cards. Despite exceeding its initial goal of $15,000 by more than $10,000 in October 2012, rewards have allegedly failed to reach backers' hands. The suit seeks restitution for backers, the state's cost and attorney's fees, and $2,000 per violation of the Consumer Protection Act in civil penalties.

"This lawsuit sends a clear message to people seeking the public's money," Washington State Attorney General Bob Ferguson said in a press release. "Washington state will not tolerate crowdfunding theft. The Attorney General's Office will hold those accountable who don't play by the rules." For what it's worth, Kickstarter itself would seem to agree; its Terms of Service make a project creator legally obligated to fulfill rewards when their project is successful or to offer refunds if they cannot deliver said rewards.

Crowdfunding sites like Kickstarter come with a certain amount of risk. The project you backed might be delayed. It might not be particularly good. It might get bought out by a larger company. Sometimes, as is allegedly the case here, you might not even get what you backed at all. While Kickstarter's ToS seem pretty cut-and-dry on the issue, this lawsuit may nonetheless change how the website handles crowdfunding in the future, as well as the public's perception of Kickstarter.
[Image: Altius Management]
Show full PR text
FOR IMMEDIATE RELEASE
May 01, 2014 back
Attorney General files lawsuit against company behind Asylum Playing Cards crowdfunded project
First state enforcement action in the nation against a crowdfunded project highlights consumer risks

SEATTLE - Consumers who financially backed a failed crowdfunding project are finally getting some backing of their own. Washington State Attorney General Bob Ferguson today filed the first consumer protection lawsuit in the nation involving crowdfunding.

Crowdfunding is a way for people to secure financing for their initiatives directly from a large pool of backers who generally provide small amounts of financial support. Crowdfunding campaigns benefit a broad range of initiatives from movie-making to high-tech gadgets to charitable giving.

The AGO lawsuit is against Edward J. Polchlepek III, otherwise known as Ed Nash, and his company, Altius Management, who ran the "Asylum Playing Cards" crowdfunding campaign in 2012 through a crowdfunding service called Kickstarter. Under Kickstarter's terms of use, consumers who back a Kickstarter project make a financial pledge in exchange for an agreed upon product or "reward" that the project is legally required to deliver.

In this case, consumers pledged funds in exchange for decks of playing cards featuring a retro-horror theme and other similar items. The AGO alleges Polchlepek and Altius took consumer money and failed to deliver the promised playing cards and other rewards to these consumers.

This case marks the first state enforcement action against a crowdfunded project that hasn't delivered the goods promised to consumers.

"Consumers need to be aware that crowdfunding is not without risk," said Ferguson. "This lawsuit sends a clear message to people seeking the public's money: Washington state will not tolerate crowdfunding theft. The Attorney General's Office will hold those accountable who don't play by the rules."

The Asylum Playing Cards campaign raised $25,146 from 810 backers, including at least 31 from Washington state in 2012. The campaign involved a project to print and market a deck of cards and other items featuring artwork created by a Serbian artist.

Project backers were promised the playing cards and other rewards with an estimated delivery date of December 2012. To date, the project has not been completed and none of the backers have received any of the promised items or any refunds. Additionally, the company has not communicated with its backers since July 2013.

Kickstarter's terms of use make clear that companies are legally obligated to fulfill the promised rewards or provide consumer refunds.

• Restitution for consumers;
• As much as $2,000 per violation of the Consumer Protection Act in civil penalties; and
• The state's costs and attorneys' fees for bringing the suit.

The state's case is being handled by Assistant Attorney General Jake Bernstein.
In this article: altius-management, asylum-playing-cards, crowdfunding, kickstarter, lawsuit, legal, washington
All products recommended by Engadget are selected by our editorial team, independent of our parent company. Some of our stories include affiliate links. If you buy something through one of these links, we may earn an affiliate commission.