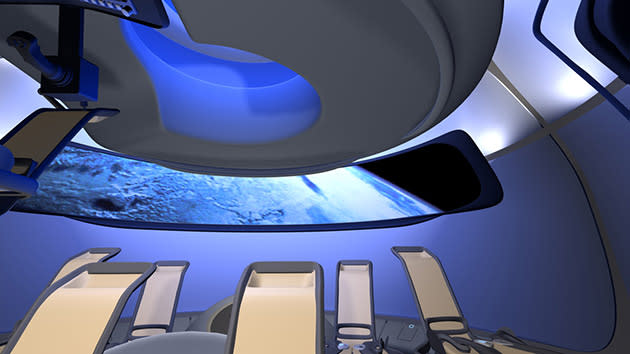 Look at the image above and choose one: a.) It's the set of a new sci-fi movie. b.) It's the mock-up of an actual spacecraft that's currently a work in progress. The correct answer? It's B -- but then the headline / tweet that brought you here probably spoiled that. This is the updated Star Trek-like interior of Boeing's CST-100 -- a spacecraft the company's developing for NASA's Commercial Crew Development program. Unlike the capsules and shuttles you see in documentaries, this design gets rid of panels and switches, adding in big windows, large screens and mood lighting instead. The airplane manufacturer likely plans to incorporate those design elements because while the vehicle's meant to take astronauts to the ISS (like SpaceX's manned Dragon capsule), it might also carry wealthy private citizens as passengers. In fact, this updated design can seat up to 10 people instead of seven like Boeing originally envisioned. We'll know by August of this year whether we'll ever see the CST-100 on a launching pad, when NASA picks one or two companies it wants to continue with the project. If it does get picked, it might ferry people to space as soon as 2017. In this article: Boeing, CST-100, iss, nasa, space
All products recommended by Engadget are selected by our editorial team, independent of our parent company. Some of our stories include affiliate links. If you buy something through one of these links, we may earn an affiliate commission.