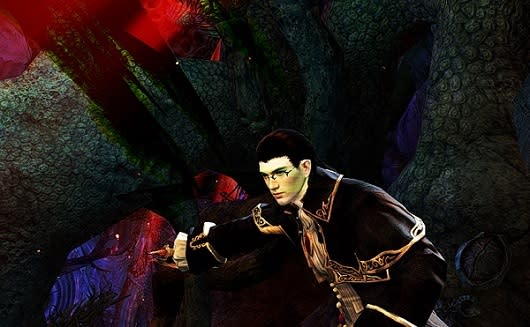 The new car smell has worn off Guild Wars 2's feature pack, which is great because it's not a car and that was getting a little weird. Whatever your opinion might be on GW2's living world, players have gotten used to biweekly content updates, and while it's refreshing to have a break every now and then, people are starting to draw comparisons to drought conditions while scavenging for any hints as to what might be coming next. ArenaNet has been busy with the Chinese beta and feature pack release, but letting us roll around like tumbleweeds for a bit is probably a good way to dry up any lingering burnout from the first part of the Scarlet arc.

In the aftermath of the Battle for Lion's Arch, we were nevertheless left with a lot of information to sift through and a few pointers as to where the story might take us next. At the very least we have enough to fuel speculation, which is my second favorite pastime (right after fearing people off of cliffs in Edge of the Mists). The mall at the edge of the world

Popular YouTube personality WoodenPotatoes released his own set of predictions for the coming season in video form. While I think some of those predictions are spot-on, others -- such as his guess that the Zephyr Sanctum won't be returning -- don't seem quite as likely.

The Bazaar of the Four Winds update was well-received by the playerbase, for good reason. Not only did it introduce a beautiful new zone with fun mechanics, an entertaining scavenger hunt, and a constant supply of stuff to fight, but it also clearly had a great deal of love put into it. The idea that ArenaNet wouldn't bring it back just because Lion's Arch is currently kaput is a bit odd; after all, the Zephyrites weren't even officially allied to LA until the end of Cutthroat Politics. Furthermore, the Bazaar of the Four Winds itself is an independent gathering that occurs whether the Zephyrites show up or not; all it needs to get a party started is a place where the merchants are unlikely to be rousted and driven off by local authorities.

If anything, I think we're likely to see the Zephyr Sanctum and bazaar return sooner rather than later. Bazaar traders were a sink for excess goods, and it's about time we had something to do with our bank tabs full of Bloodstone Dust and Blade Shards (it's at least been confirmed that we'll meet a merchant with an interest in the latter). Visually, Vigil Keep doesn't make for a particularly welcoming place to congregate. While the destruction of LA has probably helped to repopulate the main cities, megaservers make that something of a moot point, and poor Gendarran Fields could probably use a break from being used as a repository for services. So here's my wild prediction: The Zephyrites will liberally interpret their trade agreement as being with the citizens of Lion's Arch rather than the city proper, and we'll see the Bazaar of the Four Winds repurposed as a neutral hub, at least temporarily.

Why would they do that? Captain Ellen Kiel does have a certain amount of pull with them, and while nominally the Zephyrite alliance is with the Captain's Council, I have a feeling that the ownership of LA itself is going to be in dispute in the future. This has potentially massive implications for the trade agreement with the Zephyrites: Their leader, the Master of Peace, originally sparked off the Cutthroat Politics election by declaring that the trade agreement would be given to whoever could win the support of the people. The Council is intent on clearing out any civilians from the ruins of the city -- not just for their own safety, mind, but because they no longer have any reason to be there. Some of those people are looters, but others are former citizens who want to access the wreckage of their homes, possessions, and lives. I believe that this is setting the stage for future conflict, especially since the Captains' Council chose to ignore Kiel's warnings about an impending attack by Scarlet and are probably due for a challenge on their fitness to run the city. Even if we don't rebuild Lion's Arch in season two, I doubt ArenaNet is going to let the zone sit untouched by the living world story for long.

As for the Zephyrites, I think their connection to Glint has fewer implications for encountering Kralkatorrik than it currently does for the potential of Elder Dragon minions to shake off the yokes of their toothy masters. If you're unfamiliar with Glint, know that she was a former servant of Kralkatorrik whose compulsion to serve was broken; she turned against him and became a benevolent (if not entirely forthcoming) agent against evil. She also had a cute baby dragon, the fate of whom is currently unknown. Some fans have guessed -- correctly, I think -- that the Zephyrites are literally protecting Glint's legacy and might as well stick a "baby on board" sign on the back of their skyship.

The concept of a free minion's child being born uncorrupted by their respective Elder Dragon is potentially very interesting because we know of at least one other large, magical, benevolent parent figure who has recently proven to not be one hundred percent willing to share everything she knows about the dragons: the Pale Tree. If you'd only seen the things I've seen, you'd wake up screaming from the Dream

As you load into Caledon Forest for the first time on a brand-new Sylvari character, you might overhear two NPCs having a conversation about the Wyld Hunt. A sapling asks a Wyld Hunt Valiant what the call feels like, and the Valiant explains that it feels like vines crawling up the spine, making her obsessed with her task until she can't think of anything else. "That sounds unpleasant," the sapling chirps. It also sounds just a trifle sinister for a culture so heavily centered on free will and philosophical pondering.

I said in a previous article that I wasn't going to discuss the A Study in Scarlet story instance until after season one ended because I knew at the time what was coming and any discussion of it would have been less speculation and more of a giant spoiler. Now that we're all on the same page, here's what we know: Scarlet encountered something in Omadd's machine that broke the limits of her mind. Emissary Vorpp further speculated that the machine had allowed Scarlet to see into a part of herself which had been walled off for her own protection. If the Pale Tree knew what Scarlet would find, she's been concealing it from her children: The image of the encroaching red briar creeping up the Tree in the short story What Scarlet Saw and her resigned sadness over Scarlet's fate may also be an indication that she knows she can't keep them safe from it forever.

I'm not going to delve into the popular theory that Sylvari are unwitting minions of the Elder Dragon Mordremoth because to discuss the evidence for it would take up an entire article's worth of space. I think it's safe to say, though, that Mordremoth and the Sylvari are connected and that we're only going to find out more about what form that connection takes in season two -- especially since chances are very good that we'll be heading out into Brisban Wildlands and beyond very soon. Last time I talked about gameplay in Brisban, so now you get to hear me talk about lore in Brisban. When I first started playing, it was my least favorite zone, and the very last one I completed on my main character. It wasn't until I did complete it that I realized just how much it has packed into it. It's one of the zones with the greatest connection to the original Guild Wars, with tidbits such as a ghostly battle between the White Mantle and classic-flavor Shining Blade agents, as well as an activity that will test your familiarity with GW1 NPCs.

There are a lot of reasons to think that the next season of the living world story will see us head in that direction, not least of which is Marjory's older sister Belinda traveling to the area to root out a group of black market traders who are disrupting the economy of Divinity's Reach. Marjory and Kasmeer are already deeply connected to human politics, and Brisban Wildlands is full of bandits, who are tools of the corrupt Ministry and opposed to the Seraph. Bandits are also in cahoots with the modern incarnation of the White Mantle, so it makes sense that they'd inhabit their old stomping grounds.

Brisban is also occupied by the Inquest, who are allied with Scarlet's Aetherblades and known researchers of dragon energy. The zone contains one area, Toxal Bog, which is affected by the same anomalies surrounding the defunct Thaumanova Reactor. Nearby is the Thaumacore Inquiry Center, an Inquest facility containing a mysterious and powerful energy source. Maybe Asura just enjoy slapping a prefix that means "wonderous" on stuff, or maybe the Inquest doesn't know when to quit. I'm placing my bets on the latter.

The Nightmare Court has a strong presence in the zone as well, with roots (har har) in Joy's End. They've allied themselves with both the bandits and the Inquest, forming a group called the Sinister Triad. The Triad congregates around Fort Vandal, an area notable for containing an unused zone portal that just so happens to be guarded by max-level champion bandit guards. Brisban contains another unused portal toward the top of the map, which is blocked off by a broken bridge; bandits are repairing that too. Man, they're just all over the place!

What lies beyond Brisban Wildlands is almost certainly Malyck's equivalent of the Pale Tree as well as the home territory of Mordremoth itself. I don't want to make too many bizarre predictions, since ArenaNet is probably going to add plenty of unforeseen new stuff in the future to derail my wildest hopes, but right now it certainly seems as though all roads lead to Brisban and further into unexplored regions of the Maguuma Jungle. I'll be happy if season two of GW2's living world tempers that new stuff by picking up some standing plot threads, but I'll be almost as happy if I get to hang out in Riven Earth again.

I'll make one bizarre prediction: Faren will be revealed as Mister E. Why? To be honest, I really just want to see him turn out to be a reference to The Scarlet Pimpernel. I'm a sucker for that trope.

What are your predictions for season two? Are you ready to jump back into having regular updates and story content, or are you still hoping ANet will break out an expansion announcement? Does the introduction of Lawless armor into the gem store mean that bandits are invading the Black Lion Trading Company too? A warm welcome to all of the new players in China, and I'll see you in the Mists!

Anatoli Ingram suffers from severe altitis, Necromancitosis, and Guild Wars 2 addiction. The only known treatment is writing Massively's biweekly Flameseeker Chronicles column, which is published every Tuesday. His conditions are contagious, so contact him safely at anatoli@massively.com. Equip cleansing skills -- just in case.
In this article: anet, arenanet, bazaar-of-the-four-winds, brisban-wildlands, buy-to-play, elder-dragons, ellen-kiel, fantasy, featured, flameseeker-chronicles, guild-wars, guild-wars-2, gw, gw1, gw2, living-story, living-world, lore, mordremoth, ncsoft, opinion, pale-tree, scarlet-briar, sylvari, wild-mass-guessing, zephyr-sanctum, zephyrites
All products recommended by Engadget are selected by our editorial team, independent of our parent company. Some of our stories include affiliate links. If you buy something through one of these links, we may earn an affiliate commission.