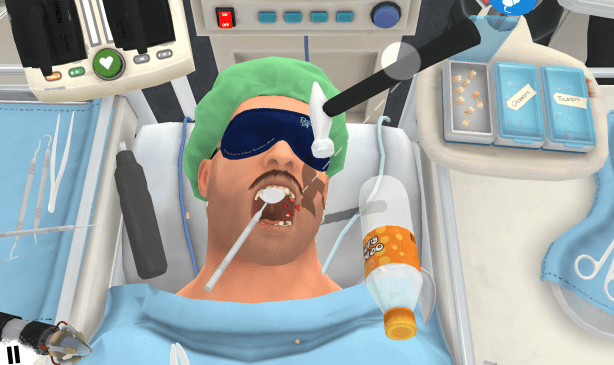 Surgeon Simulator on iPad has received its first update, turning the purposefully-awkward game about a terrible surgeon into a purposefully-awkward game about a terrible surgeon and linguist. The update adds new languages to the game, while also paving the way for an alien patient DLC, which will be added free of charge "soon."

The related press release also gave a glimpse into just how many people in the world should never be trusted with sharp medical instruments: 28,400 Surgeon Simulator Touch videos were uploaded to YouTube during its launch month. While that's not necessarily a 1:1 ratio of players to videos, even one amateur surgeon cracking open ribcages with hammers is plenty.
[Image: Bossa Studios]
Show full PR text
RED ALERT!

SURGEON SIMULATOR FOR iPAD EMERGES FROM THE THEATRE WITH NEW UPDATES

Launched last month to global acclaim, Surgeon Simulator left its bloody prints across the paid App Store charts, reaching the Top 3 overall in all English-speaking countries. The iPad version has already hit the top 5 overall in 49 countries, as well as enjoying a blood-soaked tenure at the summit of the Role Playing chart across 91, including the US, UK, Australia and Canada.

Fans across the globe can now enjoy butchering Bob in the following languages:

· 28,400 Surgeon Simulator Touch videos were uploaded to YouTube during the iPad's launch month

· That's in addition to the 2.34 million videos uploaded since the PC version launched last year

· The 15 Biggest Surgeon Simulator Touch videos have a combined total of 17,163,907 views, with PewDiePie and Markiplier leading the ratings
In this article: bossa-studios, dlc, ios, ipad, language, mobile, surgeon-simulator, surgeon-simulator-touch, update
All products recommended by Engadget are selected by our editorial team, independent of our parent company. Some of our stories include affiliate links. If you buy something through one of these links, we may earn an affiliate commission.