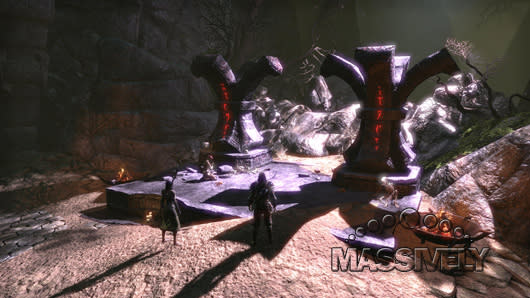 I threw on a TV show, loaded up on Diet Mountain Dew, and proceeded to mob grind my way through Bangkorai until I reached level 44. It's not that mob grinding in MMOs is unusual, since many players do it every time they log in. I usually avoid it, though, and for whatever reason it scratched my particular ESO itch on this particular day.

What about you, Massively readers? Do you mob grind in your MMO of choice?

Every morning, the Massively bloggers probe the minds of their readers with deep, thought-provoking questions about that most serious of topics: massively online gaming. We crave your opinions, so grab your caffeinated beverage of choice and chime in on today's Daily Grind!
In this article: bethesda, bethesda-softworks, bethsoft, daggerfall, daily-grind, elder-scrolls, elder-scrolls-online, eso, factions, grind, grinding, mob-grind, morrowind, oblivion, opinion, pvp, rvr, skill-based, skyrim, tamriel, tdg, tes, teso, the-daily-grind, the-elder-scrolls, the-elder-scrolls-online, three-faction-pvp, three-way-pvp, zenimax, zenimax-media, zenimax-online, zenimax-online-studios
All products recommended by Engadget are selected by our editorial team, independent of our parent company. Some of our stories include affiliate links. If you buy something through one of these links, we may earn an affiliate commission.