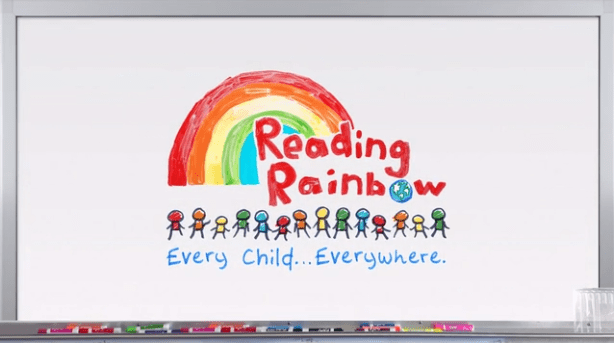 While folklore might suggest a pot of gold at the end of a rainbow, it might actually be your PlayStation or Xbox. Reading Rainbow, the PBS children's series that recently found new life - and new funding - via Kickstarter has announced a new $5 million stretch goal that will bring the series to home game consoles.

"When we reach our next goal of $5,000,000, we'll also be able to bring the service to mobile phones, Android, game consoles like XBOX and PlayStation, and set-top boxes like AppleTV and ROKU," updated text on the program's Kickstarter page reads. Unfortunately, we're not sure which PlayStation or Xbox systems LeVar Burton and crew are referencing, but seeing as how the crowdfunding campaign has already hit $3 million, it might not be long before we find out.

Hopefully we gamers can keep it together should Mr. Burton and his program appear via our consoles. But we know it can be hard meeting your childhood heroes.
[Image: Reading Rainbow]
In this article: kickstarter, levar-burton, microsoft, playstation, ps3, ps4, reading-rainbow, xbox, xbox-one
All products recommended by Engadget are selected by our editorial team, independent of our parent company. Some of our stories include affiliate links. If you buy something through one of these links, we may earn an affiliate commission.