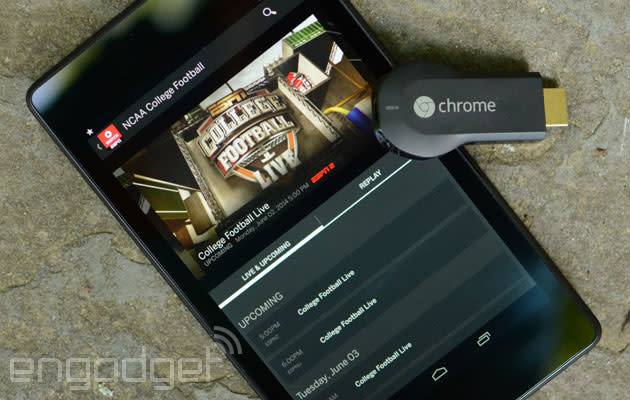 The response Google's received since opening up its Chromecast SDK has been phenomenal, as more and more services continue to bring support for the tiny streaming device. As of today, we can add some extra entertainment options to the list. WatchESPN, Major League Soccer, Crunchyroll and the search giant's own Google+ are all welcoming Chromecast compatibility, thanks to updates to their respective apps on iOS and Android. WatchESPN and MLS Matchday join MLB.tv in letting you Cast live sports right from your smartphone or tablet -- that's assuming you have the right subscription, of course. Additionally, the Google+ iOS and Android applications now let you use the $35 dongle to display photos and videos on a TV near you; Crunchyroll, meanwhile, does the same, but with popular anime shows instead of your own media.

"We're excited to bring more content to Chromecast and we'll continue to work with major local content partners," a Google representative said to Engadget. In other words, you can expect that more of your favorite services and apps will be friendly with Chromecast soon, making its small price tag seem that much better over time. (For example, we're told Watch ABC and Watch Disney are up next.) The new versions of Crunchyroll, Google+, MLS Matchday and WatchESPN are rolling out as we speak, so be sure to keep an eye on the App Store and Google Play.

In this article: Chromecast, Crunchyroll, ESPN, Google, Google Chromecast, hdpostcross, Major League Soccer, MLS, MLS Live, MLS Matchday, mobilepostcross, Soccer, Sports, WatchESPN
All products recommended by Engadget are selected by our editorial team, independent of our parent company. Some of our stories include affiliate links. If you buy something through one of these links, we may earn an affiliate commission.