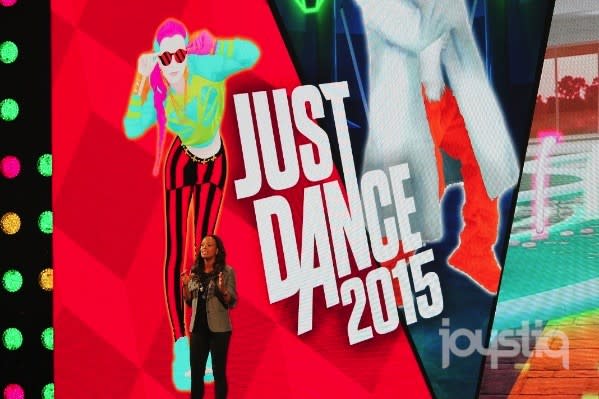 Like day follows night and night follows day, Just Dance 2015 will shake its evergreen booty on systems this October - a trailer shown during Ubisoft's E3 conference listed Xbox One, Xbox 360 and Wii U while the official site also lists logos for PS3, PS4 and Wii. There's no Aisha Tyler in it though, and that's always a disappointment. Meanwhile, Just Dance Now promises to give players a mobile way to groove.

Update: The game will launch on October 23 in EMEA regions, and then the day after in the UK. The North American release window remains October. Additionally, Ubisoft unveiled some of the 40 tracks coming to the dancing game, which you can check out below the break.
Show full PR text
UBISOFT® UNVEILS JUST DANCE® 2015 FOR CONSOLES AND JUST DANCE® NOW– A NEW MOBILE EXPERIENCE

LOS ANGELES – June 9, 2014 –Today, at the Electronic Entertainment Expo (E3), Ubisoft® announced the development of both Just Dance® 2015 and Just Dance® Now. Just Dance 2015 is the latest installment of the world's #1 dance game franchise and will be available on all motion-control gaming platforms on October 23 in EMEA (October 24th in the UK) and in October in the US. Just Dance Now is the all-new mobile experience that allows players to play Just Dance tracks with their smartphones and any Internet-connected screen.

"We're taking the franchise to the next level this year by developing the most community-focused console game yet with Just Dance 2015, and by bringing the Just Dance experience to smartphones with Just Dance Now," said Jason Altman, Executive Producer. "Expanding into mobile allows us to reach any Just Dance fan in any setting, with the potential to reach millions of additional players."

Just Dance 2015 is developed by Ubisoft Paris, Ubisoft Reflections, Ubisoft Bucharest and Ubisoft Pune, and has the most interactive features and hottest track list yet. Here's what's new this year:

There are more than 100 million Just Dance players around the world and in Just Dance 2015, the community is as important as ever with the introduction of the all-new Community Remix feature. The feature allows players to record themselves dancing to songs from artists like Ellie Goulding, Pharrell Williams and Calvin Harris and share in the game. The community then votes on their favorites, which the development team will use to create remixed gameplay and ultimately bring fan footage into the game for millions of fans to dance against. Ubisoft is bringing the players into the actual game this year.

Fan-favorite features including the massive multiplayer mode World Dance Floor, video snippet creator Autodance and the sing along Karaoke feature are all back and revamped for the new game.

With more than 40 tracks, there's quite literally something for everyone. Get "Happy" with Pharrell Williams, "Walk This Way" with Run DMC & Aerosmith or try "Holding Out for a Hero" with Bonnie Tyler's 1980s power anthem. Whether it's pop, hip-hop or rock you're looking for, check out a selection of Just Dance 2015 tracks:

"Happy" by Pharrell Williams
"Problem" by Ariana Grande Ft. Iggy Azalea
"She Looks So Perfect'' by 5 Seconds of Summer
"Walk this Way" by Run DMC & Aerosmith
"Summer" by Calvin Harris
"Holding Out for a Hero" by Bonnie Tyler
"Only You (and You Alone)" by The Platters
"The Fox" by Ylvis
"I Love It" by Icona Pop ft. Charli XCX
"Burn" by Ellie Goulding
"Love Me Again" by John Newman
"Tetris" by Dancing Bros.
Just Dance Now

Just Dance Now creates the most accessible version of Just Dance yet by enabling players to dance anywhere, anytime with anyone. The game is streamed to any Internet-connected screen, while the free app transforms players' smartphone into a motion controller. Using a Ubisoft's proprietary technology called Ubi Bluestar, an unlimited number of people can play together in real time, even while on different data connections – 2G, 3G, 4G, or WiFi.

Download the Just Dance Now app on their iPhone®, iPod touch® or Android™ device.
Visit JustDanceNow.com on any Internet-connected screen.
Their phone will automatically sync and they'll be ready to dance!
Developed at Ubisoft Massive studio, in association with Ubisoft Paris, Just Dance Now allows fans to play Just Dance anywhere, anytime and without a video game console. The track list includes all the greatest hits from the Just Dance catalogue. The mobile experience also allows players to check their stats directly from the app, challenge their Facebook friends, and record video of their dance session to share.

For the latest information on Just Dance 2015 and Just Dance Now, please visit: www.justdancegame.com. Follow Just Dance on Twitter.com/JustDanceGame and use hashtags #JustDance2015 or #JustDanceNow.

Ubisoft is a leading creator, publisher and distributor of interactive entertainment and services, with a rich portfolio of world-renowned brands, including Assassin's Creed, Just Dance, Tom Clancy's video game series, Rayman and Far Cry. The teams throughout Ubisoft's worldwide network of studios and business offices are committed to delivering original and memorable gaming experiences across all popular platforms, including consoles, mobile phones, tablets and PCs. For the 2013-14 fiscal year Ubisoft generated sales of €1,007 million. To learn more, please visit www.ubisoftgroup.com.

© 2014 Ubisoft Entertainment. All Rights Reserved. Just Dance, Ubisoft and the Ubisoft logo are trademarks of Ubisoft Entertainment in the U.S. and/or other countries.
In this article: e3-2014, just-dance-2015, microsoft, nintendo, playstation, ps3, ps4, release-date, ubisoft, ubisoft-e3-2014, wii, wii-u, xbox, xbox-one
All products recommended by Engadget are selected by our editorial team, independent of our parent company. Some of our stories include affiliate links. If you buy something through one of these links, we may earn an affiliate commission.