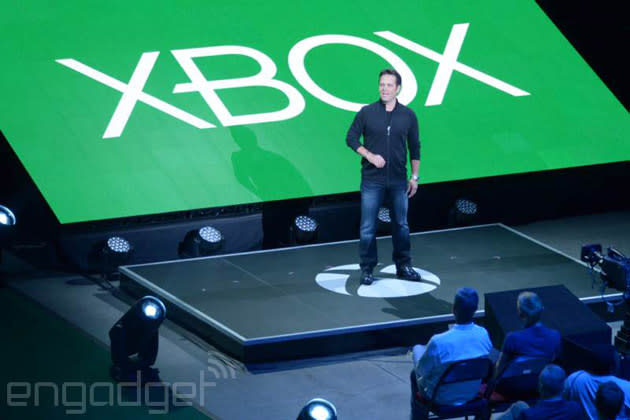 Yesterday wasn't the first time Phil Spencer took an E3 stage for Microsoft to talk Xbox, but it was his first time as the head of Microsoft's Xbox division. After taking over for Marc Whitten back in March, Spencer's been on a charm offensive. His focus was clear at yesterday's show: games, all games. Forget about last year's coming out for Xbox One as an "entertainment" platform -- yesterday's focus was all games, all the time. The 90-minute show was divided cleanly in half between games coming this year and games arriving in 2015 and beyond. It was, in short, an impressive display of the Xbox One's gaming prowess over anything else. "I want the content to be the star," Spencer told us.

So, that aside, we wanted him to give us more on the other stuff that the Xbox One does: media streaming, voice control, Windows 8 and television. And hey, what's Microsoft doing to compete with Sony's Project Morpheus VR headset, not to mention the Oculus Rift?

First things first, how is Microsoft responding to the likes of Oculus' Rift and Sony's Project Morpheus?

"I look at VR as an interesting technology. I'm watching what's going on out there; I don't really think it's a mainstream technology yet today. The nice thing at Microsoft and Xbox is we've remained invested in experimenting with a lot of what's out there, whether it's voice, or motion. Right now I'd say we have our skunkworks stuff that we're working through, but right now we're watching how the VR space evolves to see if it ends up as a mainstream consumer scenario."

Skunkworks, eh? It sounds like Microsoft's R&D department has something going on with VR, though it sounds more exploratory than anything else. And what about Xbox 360 gaming on Xbox One -- could an emulator be on the way? Spencer got verbose:

"So, not to geek out on it, Xbox 360 is obviously a Power PC-based architecture. We've got an x86 architecture on Xbox One, which makes the translation a little more challenging. The interesting thing -- the Xbox 360 has an amazing content catalog, one of the largest catalogs ever created. When I think about that content, I don't want that content to just waste away. I want it to be content people can play for many years; there are a lot of different ways for us to enable that. It's something that I'm sitting down with the team and we're brainstorming on. We don't really have a plan yet that I can communicate in a way, but I can say I want to make sure that that content is stuff people can play. I think that's an important part of investing in an online, connected community, is that the content I acquire and I'm playing is something I can carry forward with me. Right now there isn't a plan, just to be clear to people. But it's something that we have conversations about."

Check out the full interview above for all of Spencer's answers, including much more about Windows 8 apps on Xbox One and the future of Kinect.

In this article: blu-ray3d, e32014, hdpostcross, microsoft, PhilSpencer, video, windows8, xboxone
All products recommended by Engadget are selected by our editorial team, independent of our parent company. Some of our stories include affiliate links. If you buy something through one of these links, we may earn an affiliate commission.