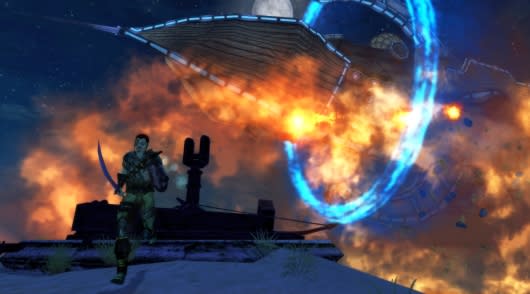 Are you ready to buckle your swash? Has your swash been buckled in anticipation? Do you own a variety of buckles and swashes? Because Dungeons & Dragons Online has just released Update 22 onto the live servers, and that means that Bards will have plenty of buckleswashing to do with the addition of the Swashbuckler enhancement line! Dance, parry, crack horrible puns, and stab at people while still retaining all of the usual song-based mechanics of Bards. It's free for everyone!

Update 22 also includes an epic-level upgrade to Three Barrel Cove, perfectly complementing the newly swacklebushing methods of Bards. There are also major improvements to guild levels and guild airships, allowing guilds to hit level 200 while sporting new and improved facilities on new and improved airships. And there's new stuff in the cash shop, too, giving DDO players plenty to do if they ever tire of the interactions of swashes and buckles.
In this article: adventure, adventures, airship, airships, buckle, class, classes, content, ddo, dnd, dungeons-and-dragons, dungeons-and-dragons-online, f2p, fantasy, free-to-play, new-content, news, news-items, patch, patches, swacklebusher, swash, swashbuckler, swushbackler, turbine, turbine-entertainment, update, updates, upgraded-content
All products recommended by Engadget are selected by our editorial team, independent of our parent company. Some of our stories include affiliate links. If you buy something through one of these links, we may earn an affiliate commission.