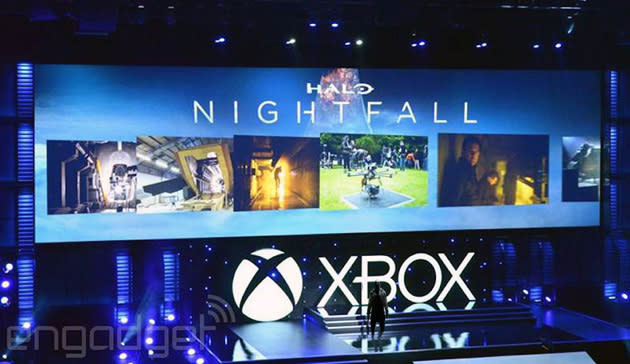 In a way, director Ridley Scott's Halo-themed project, dubbed Nightfall, brings Microsoft's tentpole shooter franchise full circle. Master Chief's galaxy-spanning exploits owe a giant debt to the filmmaker's iconic tale of deep-space horror, Alien, and now Scott is helping establish where the franchise goes on the Xbox One. As 343 Industries head Bonnie Ross said during my meeting at E3 this week, working with him "kind of upped the bar" on the series, especially compared to 343's last attempt at live-action, the Halo 4 lead-in Forward Unto Dawn. "Hopefully we get better each time," she said. Nightfall tells the origin story for Agent Locke, a character Ross said plays a "pivotal role" in Halo 5: Guardians. As far as story, that's as much as we know so far. Ross isn't sure how many episodes Nightfall will span, but said that there will be five of them leading into Halo 5's beta timeframe.

She cited Forward Unto Dawn as a learning experience. But, without it, we likely wouldn't have Nightfall.

"I think we had over 59 million views on Machinima for Forward Unto Dawn," she said. "It was definitely the feedback that we got from all of our research studies that [the series] did actually make a difference" of how people experienced Halo 4. She said that the direct responses to the series makes it a lot easier to tell stories in the future. "Our books are on the New York Times best-seller list, but they're not getting 60 million [readers]."

The episodic series was eventually released as a single film to home video, but didn't quite satiate fans clamoring to see Master Chief on the big screen and all that that would entail. Ross doesn't see the franchise heading that way, though.

"Fans keep asking for a Halo movie, and we feel that with what we have on Xbox One, TV suits us better," she said. "We're able to tell al larger story on a regular cadence; this is sort of our training wheels for Xbox One."

In this article: 343-Industries, 343Industries, e32014, gaming, Halo, halo5guardians, halonightfall, hd, hdpostcross, microsoft, RidleyScott, xbox, XboxOne
All products recommended by Engadget are selected by our editorial team, independent of our parent company. Some of our stories include affiliate links. If you buy something through one of these links, we may earn an affiliate commission.