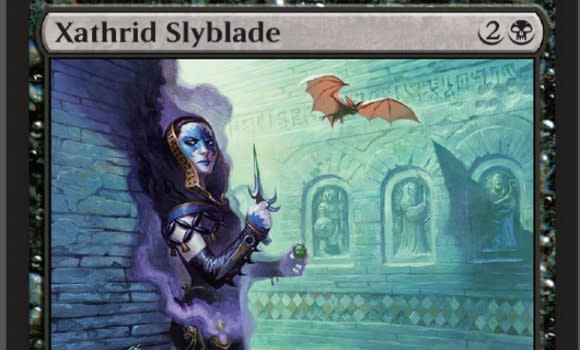 If you play Hearthstone, there's at least an average chance you've heard of, if not played, Magic: The Gathering. If so, then check out this card designed by none other than Rob Pardo, Chief Creative Officer at Blizzard Entertainment. I haven't played Magic in years and I was never very good, but that seems like one heck of a card. It'll be part of the Magic 2015 set, and was previewed at this year's E3.

Now I want everyone at Blizzard to design a card. Let's see Samwise's card. At least get him to do the art on one. It's funny, because Xathrid here reminds me a bit of Lilian Voss, who some say is a reference to this M:tG character (Blizzard says no.) Which is too bad, because it would be hilarious if we ended up with some kind of circular back and forth transfer between M:tG and WoW.
In this article: E3, EEE, Magic-the-Gathering, Rob-Pardo, Wizards-of-the-Coast
All products recommended by Engadget are selected by our editorial team, independent of our parent company. Some of our stories include affiliate links. If you buy something through one of these links, we may earn an affiliate commission.