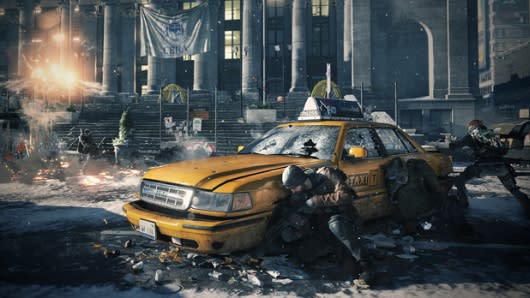 Eager to hear more about The Division in the wake of the E3 media blitz? For those of you not on the ground during the convention, the latest development blog recaps the fine points on display in the game's E3 demo. As the blog explains, the core conceit of The Division is that you're not accepting the collapse of civilization but pushing back against it, chiefly by shooting the heck out of bandits and creeps until they're not a problem any longer.

As described by the blog post, the game utilizes a complex AI for enemies -- sniping a bandit but not his friends results in the others running back for reinforcements, leading to a pitched firefight and a chance to use special unlocked abilities. The demo also showed off using the support app to take control of a drone, allowing you to see around walls and provide important data to allies even without being directly in the game. Check out the full recap for a thorough breakdown of where the game is right now in terms of game mechanics.

Massively's on the ground in Los Angeles during the week of June 10-12, bringing you all the best news from E3 2014. We're covering everything from WildStar and Landmark to Skyforge and H1Z1, so stay tuned!
In this article: con, console, consoles, convention, convention-coverage, convention-demo, division, e3, e3-2014, electronic-entertainment-expo, event-coverage, expo, massively-event-coverage, post-apocalypse, preview, previews, shooter, the-division, tom-clancy, tom-clancys-the-division, ubisoft
All products recommended by Engadget are selected by our editorial team, independent of our parent company. Some of our stories include affiliate links. If you buy something through one of these links, we may earn an affiliate commission.