Sennheiser's Ambeo 3D audio soundbar goes on sale in May for $2,499 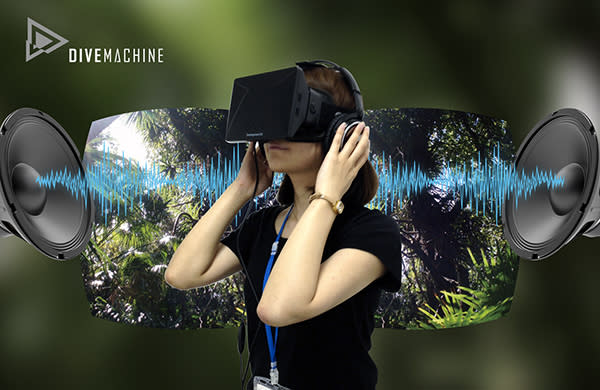 You slave over trying to match the 3D visuals of the Oculus Rift with its audio equivalent, and then what do you do for a promotional image? Someone in an Oculus rift and earphones, and a pair of rendered speakers. Job done. Fortunately, Divemachine is making good progress with its immersive audio system. While VR headsets continue to get better at movement detection and the whole visual-realization-of-a-3D-space thing, audio's not had so much attention lavished on it. Genetec's Divemachine platform involves collaboration with environmental sound designers, and connects Oculus Rift headset movements to audio, creating what it's calling full 3D sound.

Our jungle-based demo wouldn't make sense to show you on video -- it involved us moving around with animal noises and other environmental sounds coming from various directions. Importantly, they matched our head movements too, combining audio output with (in this example) the Oculus Rift's motion detection. Admittedly, the effect is subtler than the optical side, but we were able to venture towards a thundering waterfall, despite not being able to see it through the trees and undergrowth.

There's been other 3D audio headsets, like this one which connects to smartphones, but the trick here is matching the visuals with the sound -- and you're (hopefully)already getting a relatively immersive experience from the headset. The company plans to bring a developmental platform to multiple VR headsets in 2015 (it's not exclusive to Oculus), with the 3D sound talents aiming at more accurate replications of locations. Genetec plans to offer up dedicated contents globally in 2015 -- it might want to wait for the consumer products to go on sale for a while.

In this article: 3daudio, audio, cnetjapanlive, hands-on, OculusRift, VirtualReality, vr, vrheadset
All products recommended by Engadget are selected by our editorial team, independent of our parent company. Some of our stories include affiliate links. If you buy something through one of these links, we may earn an affiliate commission.