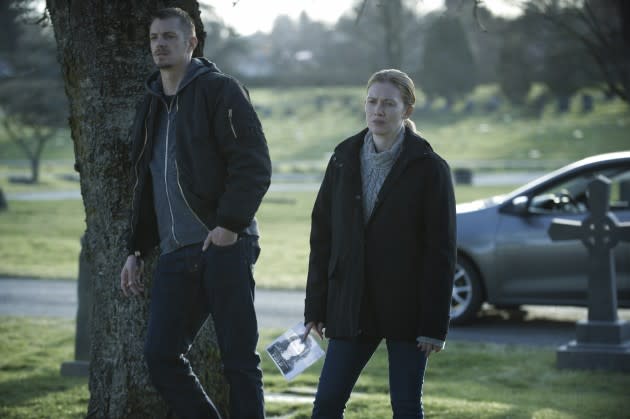 Netflix has revived The Killing for one final six-episode season, but what if you're not sure about binge watching the first three (already on Netflix, of course) to get ready? A video posted by the service gives you a good peek at some of the characters and vibe of the story so far, all in less than two minutes. The Killing season four comes to Netflix August 1st (at 3AM ET, as usual), so you've still got plenty of time to blast through the existing seasons first. Showrunner Veena Sud called Netflix an "ideal platform" for the show because you can watch it all at once and we agree -- the slow burn of the first couple of seasons isn't nearly as frustrating when it's over in days instead of months or years. She also said moving to the streaming service allowed for longer episodes (55 - 59 minutes without commercials, as opposed to 43 minutes for the other seasons), and notes that this story will pick up where the events of season three left off.

The story's not over. Relive The Killing Seasons 1-3 before The Final Season, August 1, only on Netflix. http://t.co/YCrEkuY2EL

In this article: hdpostcross, netflix, recap, season 4, the killing, thekilling, video
All products recommended by Engadget are selected by our editorial team, independent of our parent company. Some of our stories include affiliate links. If you buy something through one of these links, we may earn an affiliate commission.