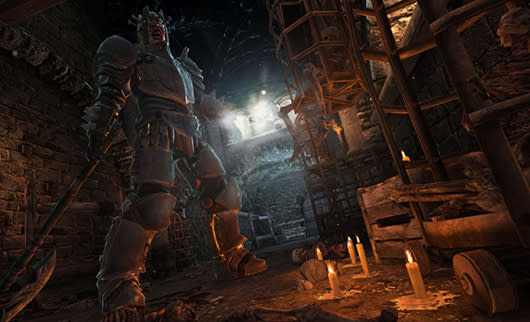 Before Techland properly introduces players to the dark fantasy world of Hellraid next year, developer Shortbreak Studios offers a tour of the world via the iOS puzzle game Hellraid: The Escape.

Officially described as a "visually stunning action-adventure mobile game," Hellraid: The Escape casts players as an amnesiac who's been locked in a cage by a sorcerer for reasons that aren't entirely clear. Like all the best cages, this one is guarded by demons, and our protagonist will have to explore his prison and solve puzzles in order to make the titular escape.

Hellraid: The Escape is available on the App Store at $2.99. It features no in-app purchases, but Shortbreak plans to release periodic, free content updates for the mobile game.
[Image: Shortbreak Studios]
In this article: apple, hellraid, hellraid-the-escape, ios, ipad, iphone, mobile, pc, shortbreak-studios
All products recommended by Engadget are selected by our editorial team, independent of our parent company. Some of our stories include affiliate links. If you buy something through one of these links, we may earn an affiliate commission.