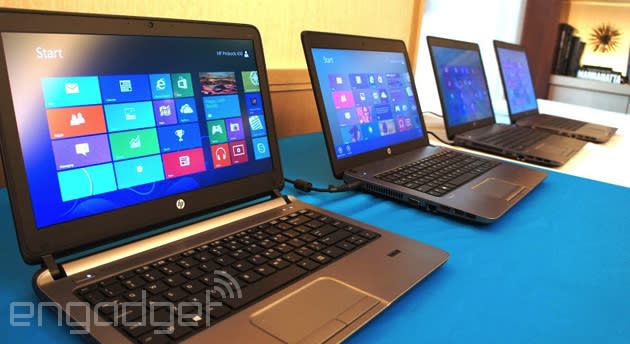 Both Gartner and IDC appear to have some good news for the PC industry -- the seemingly never-ending death spiral may have come to an end. While the two research groups don't agree completely on the numbers, it does appear that after two years of stead and sizable declines, the PC industry is seeing shipments flatten out. In total, according to Gartner, 75.8 million computers were shipped in the second quarter of 2014, a negligible 0.1 percent drop from the same quarter a year ago. While IDC saw a much more sizable 1.7 percent fall in PC shipments, that's still a far cry from the 7.1 percent decline it anticipated and the smallest it's measured in two years.

Two years ago the netbook market imploded and tablets started eating into laptop sales. Since then shipments of traditional computers have been falling at an alarming rate. IDC doesn't necessarily expect this to indicate a longer term trend towards flat PC sales. Basically, the worst may not be over yet. Despite impressive growth from major players like Dell, HP and Lenovo smaller companies are still seeing tremendous drop off. And the declines are particularly steep in markets like India where the most potential for growth is. Instead the improvements during the quarter were carried primarily by the US and Western Europe, which might not be able to keep the industry from declining further in the long run.

In this article: acer, apple, asus, dell, gartner, hp, idc, lenovo, numbers, pc shipments, sales
All products recommended by Engadget are selected by our editorial team, independent of our parent company. Some of our stories include affiliate links. If you buy something through one of these links, we may earn an affiliate commission.