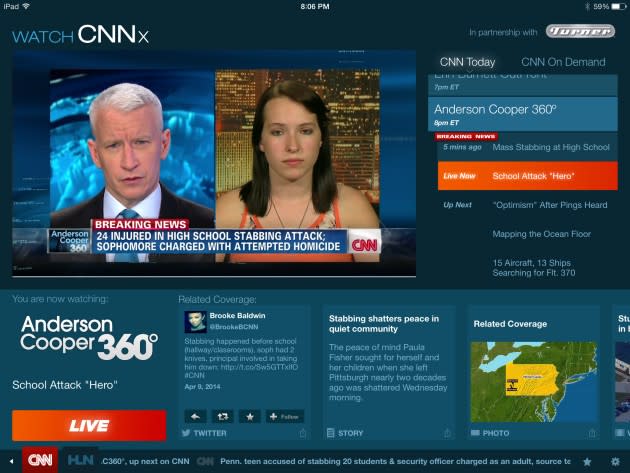 Back in April CNNx launched, letting viewers jump through the news of the day and watch what they want, when they want. The only problem? Other than the fact that it's restricted to CNN's iPad app and web site, only subscribers to a few providers could actually access it. Now, CNN is rolling out the service nationwide, and as Multichannel News points out, Time Warner Cable as the only major provider that's not yet set up for access. While it starts off with a live feed of the channel, you can skip through the story rundown and select anything from the past day, then just watch that or see related info. The plan is to also bring this to other set-top TV boxes soon, but there's still no word on access for Android devices, iPhones, or other mobile platforms. There's a demo video after the break so you can get a feel for it, but iPad-owning cable/satellite TV subscribers can just open the CNN app and try it out right now go to the website here.

In this article: app, apple, cablenews, cnn, cnnx, hdpostcross, ipad, news, streaming, video, watchcnnx
All products recommended by Engadget are selected by our editorial team, independent of our parent company. Some of our stories include affiliate links. If you buy something through one of these links, we may earn an affiliate commission.