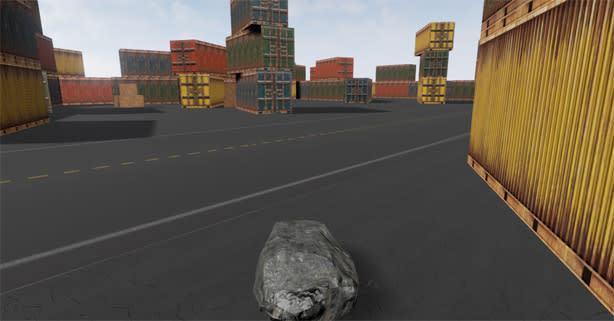 It's one thing to play video games, and another thing to write about them. But do you have what it takes to play a game about writing about playing video games? Journalist and budding developer Jason Evangelho will soon add another metatextual layer to your life with Game Journalism Simulator, an in-progress game that simulates the mundane life of an industry writer.

Inspired by off-the-wall sims like Goat Simulator and Rock Simulator 2014 (pictured above), Game Journalism Simulator is currently in the design phase, and is a collaborative project between Evangelho and other real-world gaming journos. Hopefully, the final product will simulate essential experiences like filing expense reports, subtweeting your colleagues, and suffering in existential despair after your multi-page feature gets fewer hits than a blurb stating that a game will be rendered in 1080p on one platform and not another. Among other purely hypothetical situations.

"I rounded up a few other journos including Daniel Tack of Game Informer, registered the trademark for Game Journalism Simulator, and we're neck deep in our design document, plotting the course forward!" Evangelho told Siliconera. "It's a serious project for us, and we want it to be a genuinely fun game which both empowers players and makes them laugh their asses off."

Now, what would it be like to review a simulation of writing about playing video games? That would be ... nope, sorry, that's one too many layers of abstraction for us. Our brains are broken. We're done here.
[Image: Strange Panther]
In this article: game-journalism-simulator, jason-evangelho, pc
All products recommended by Engadget are selected by our editorial team, independent of our parent company. Some of our stories include affiliate links. If you buy something through one of these links, we may earn an affiliate commission.