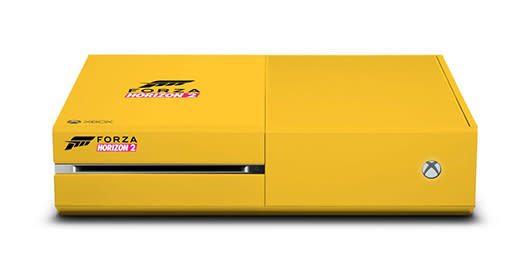 To celebrate Comic Con (and convince people to ignore Spider-Man in favor of the Xbox Lounge), Microsoft is awarding 20 lucky fans exclusive Xbox One consoles patterned after games such as Titanfall, Sunset Overdrive and Forza Horizon 2.

Entering to win one of these machines is relatively easy (assuming you're at this year's San Diego Comic Con). Simply visit the Xbox Lounge on the second floor of the Manchester Grand Hyatt hotel, find the display case containing the exclusive Xbox One designs, take a photo of your favorite with the "#XboxOne" and "#XboxSweeps" hashtags attached, and you're entered in the drawing.

If you can't attend Comic Con but would still like an Xbox One emblazoned with promotional imagery, Microsoft is also giving away a custom Nerdist Industries console to those at home. Details on how you can win that machine have yet to appear, but Microsoft claims a tweet is coming soon which will outline the entire process.
[Image: Microsoft]
In this article: microsoft, nerdist, san-diego-comic-con, san-diego-comic-con-2014, sdcc-2014, xbox-one
All products recommended by Engadget are selected by our editorial team, independent of our parent company. Some of our stories include affiliate links. If you buy something through one of these links, we may earn an affiliate commission.