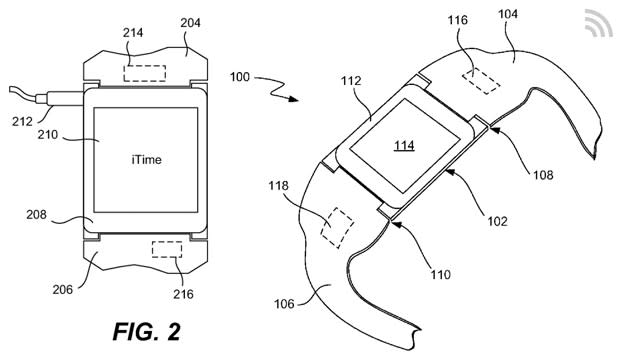 A new Apple patent for smartwatch designs and features is bound to fuel more speculation about an incoming "iWatch," even though such claims often amount to nothing. Still, the patent is interesting on its own merits. One version shows a receptacle band that could accept an external "iTime" module as shown above -- not unlike the iPod Nano watch craze from 2010. However, Apple's band has built-in electronics like Bluetooth transceivers, along with accelerometers and GPS modules -- sensors rumored to be built-in to Apple's upcoming wearable. According to the document, that would enable smartphone or computer notifications that you could see, hear or feel. You'd also be able to dismiss notifications or perform other actions by shaking your wrist once or several times, according to another claim. While all of this is interesting, it could be largely unrelated to any products planned by Apple, since it was filed in 2011 -- and similar Apple patents have amount to nothing thus far. However, the issue date of today (July 22nd) is intriguing, since rumors are gathering steam over a smartwatch launch at Apple's next event, possibly in September. Either way, we hope that wearables don't become the next patent battlefield -- only lawyers get excited by a prospect like that.

In this article: apple, itime, iwatch, patent, smartwatch
All products recommended by Engadget are selected by our editorial team, independent of our parent company. Some of our stories include affiliate links. If you buy something through one of these links, we may earn an affiliate commission.