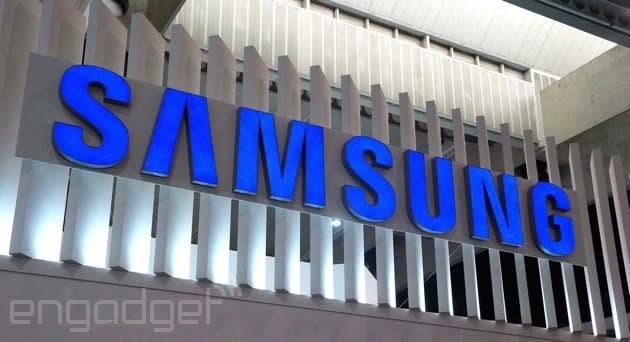 When Samsung took the time to update investors ahead of its upcoming quarterly earnings report, it warned 'weak demand' for phones and an increased marketing spend could hit the company hard. That report hit today, and it's as bleak as the company expected. In its second quarter, Samsung posted profit of 6.25 trillion won ($6.1 billion), down from 7.77 trillion won ($6.96 billion) last year, its lowest quarterly profit in two years. Smartphone sales contributed the majority of its revenue, but the Samsung's flagship phone, the Galaxy S5, languished as the iPhone continues to fly of shelves and Chinese brands cut directly into its low-end business.

As expected, Samsung blames the global slowdown of mobile sales and a strong won for its poor second quarter, noting that it spent more on marketing to shift a backlog of devices it couldn't sell. And as fewer phones hit the market, its chip business also took a hit. With all of those factors weighing heavy on its shoulders, Samsung says that the second half of 2014 will "remain a challenge" as global competition "intensifies." It expects mobile sales to grow in the next quarter, helped by the rollout of new flagship products, which likely includes the Galaxy Note 4, but warns it will be even harder to turn sales into profit, as the average cost of smartphones continues to fall.

With Apple rumored to be working on a bigger iPhone and its rivals eating into its market share in Asia, execs are well aware that the company has its work cut out if it's to return to growth in its next quarter. Samsung believes introducing new technologies and adopting new designs will help, as will concentrating on a smaller number of products, suggesting we could see a whole new Samsung emerge in the coming months.

In this article: earnings, galaxy, galaxy s5, mobilepostcross, profit, q2, quarterly, report, samsung
All products recommended by Engadget are selected by our editorial team, independent of our parent company. Some of our stories include affiliate links. If you buy something through one of these links, we may earn an affiliate commission.