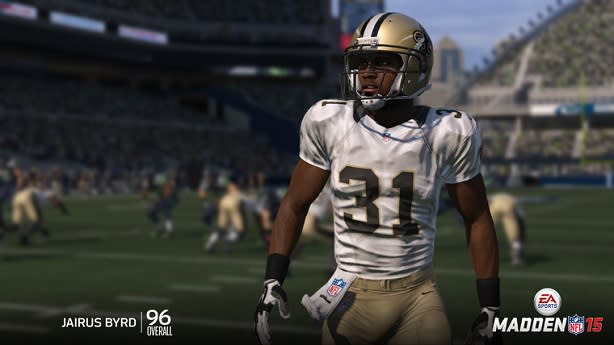 EA closed out its top athlete rankings for Madden NFL 15 this weekend with lists of the highest-rated safeties and kickers/punters in the game. Saints free safety Jairus Byrd (96 overall) as well as strong safeties Kam Chancellor of the Seahawks and the Steelers' Troy Polamalu (both 93 overall) topped the final lists for defensive players in the game. Likewise, Miami Dolphins punter Brandon Fields will be the highest-rated player in the game to boot the pigskin with his foot, thanks to his 96 overall rating.

This follows EA Tiburon's gradual ratings reveal in best-of list form, in which it covered defenders, offensive players like quarterbacks and running backs as well as the NFL's best rookies. EA Sports is now in the midst of unveiling its full team ratings on a division-by-division basis. It currently has spreadsheets loaded with ratings for players in the AFC and NFC North and South divisions available on the game's site. Madden 15 will launch August 26 for PS4, Xbox One, PS3 and Xbox 360.

Strong Safety:Kicker/Punter:
[Image: EA Sports]
In this article: EA, EA-Sports, Electronic-Arts, football, jairus-byrd, kam-chancellor, madden, madden-15, madden-nfl-15, nfl, player-ratings, ratings, sports, troy-polamalu
All products recommended by Engadget are selected by our editorial team, independent of our parent company. Some of our stories include affiliate links. If you buy something through one of these links, we may earn an affiliate commission.