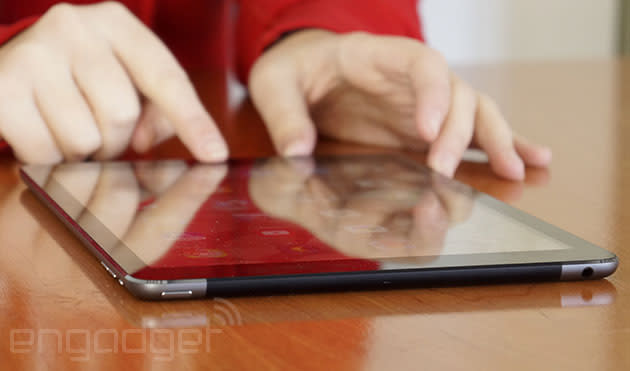 Apple is set to launch not only new iPhones and a possible wearable soon, but also a new line of iPads, according to Bloomberg. Its sources told it that a full-sized, 9.7-inch iPad is now being mass-produced for a launch near the end of the quarter, and that a 7.9-inch iPad mini will arrive a few months later. If the rumor pans out, it wouldn't be too mind-blowing: after all, the iPhone 5s was launched last year on September 10th, with the iPad Air and mini coming a bit more than a month later. However, one interesting new tidbit did emerge: the new iPads will have an anti-reflection screen, a big change from past models. That would make sense if Apple used either anti-glare Sapphire displays or Gorilla Glass -- as Corning is working on less reflective (and anti-bacterial) displays too.

The rumor mill has pegged the launch of the iPhone 6 for September 9th, almost exactly a year after the last model. That event could be chockablock, given that both a 4.7- and 5.5-inch model are expected, so a separate iPad launch event would make sense. A smartwatch is also rumored to be coming in October, possibly at the same time as one or both iPads. That would mean a pretty busy couple of months for Apple, but keep in mind that it's all still utter speculation at this point.

In this article: 7.9-inch, 9.7-inch, apple, iPad, iPad Air, iPad mini, Rumor
All products recommended by Engadget are selected by our editorial team, independent of our parent company. Some of our stories include affiliate links. If you buy something through one of these links, we may earn an affiliate commission.