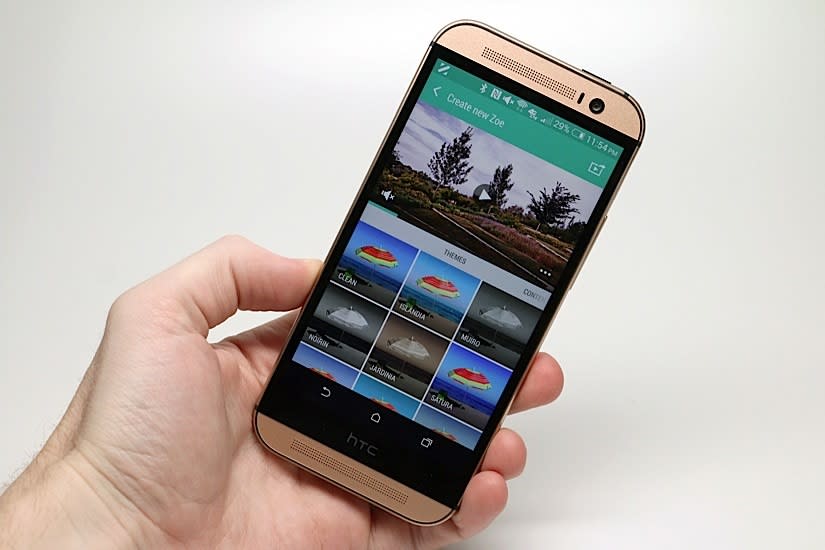 HTC's days of acting like a wallflower at the school dance are over -- the company's ready to explore its social side. Its first attempt is to turn Zoe, one of its most creative software features, into a social network that not only lets you share photos and videos with your friends, but allows them to pitch in and edit them as well. Known simply as the Zoe app, the new program launches in open beta today and will be available on several Samsung, LG and other Google devices. Finally, HTC is looking outside of its own user base and reaching out to those who may never have touched any of its products before. The Zoe app was created by a new HTC division called Creative Labs, which is led by Sense UI head Drew Bamford. It's the first of several projects the team has in the works, and is the only publicly known project so far. The app has been in limbo as a mere placeholder for the last five months, and the service won't graduate to final status until sometime this fall. It's a logical step for Zoe, which started out as a photography feature on the HTC One M7. Named after an old-fashioned zoetrope which spun around and around to create a short movie, the feature fit the description. It recorded a few seconds of video and a burst of 20 images and turned it into a Harry Potter-esque moving picture. This breathed life into photo galleries and added flash to Video Highlights, a feature which stitched up to 16 Zoes, stills and video clips of your choice and mashed them into a cool 30-second highlight montage. These reels are set to whatever music you want and you can even select one of several different themes to ensure each reel portrays the right mood. They're both utilized in the new app, and are certainly more entertaining than the traditional family vacation slideshow.

As neat as Zoe and Video Highlights were, there wasn't much you could do with them aside from uploading them to YouTube or generating a unique URL to show off your content. To share a prized reel with friends and family required effort and, unless loved ones subscribed to (and actively visited) your YouTube account, an easier way for them to view your stuff. You don't have to worry about this when using Facebook and Instagram; take a picture, do a bit of editing and within seconds your memory will be uploaded and viewed by everyone you've ever known. The Zoe app isn't quite that quick and easy yet, but it's definitely an improvement over how it was before. Just like other social networks, there's a feed comprised of your followers, as well as a "discover" feed in case you want to explore a bit (although there's no way to specific searches for people or topics). You find friends using your Google or Facebook account, but unfortunately there isn't a way to search for specific people who may not be in your personal rolodex. (HTC says it'll be included in the final release.) Similar to Instagram, your feed is a vertically scrolling page that consists of your friends' montages, and you can like or comment on each one.

So far it sounds like your average social network but with 30-second highlight reels instead of pictures or 15-second videos. One unique benefit to Zoe, however, is the ability to collaborate and edit any montage you want by "remixing" it. The app grabs all of the shots used in that clip and gives you the chance to remove whichever ones you want and add a few photos of your own, change the theme and the music, and presto -- you've just remixed your friend's vacation reel. Of course, you can even do it to your own clips, and remixing can be as simple as rearranging the order in which those shots are displayed in the clip, so it's up to you to determine how deep you want to dive into the editing process.

I haven't decided yet if this is really cool or really creepy; perhaps it's a little bit of both. Say you go on a trip with friends and you want to pool your photos and videos together to make an epic montage. Done. It's so much easier to do it this way than getting them all onto the same desktop computer and sideloading them into one HTC device. Now, it's all cloud-based. It even works if you use more than one phone (or hopefully a tablet, once Zoe is out of beta) and you want to bundle two different albums together. On the creepy side, there's something weird about the idea of a follower doing whatever they want with my own content. At least HTC has safety measures in place, should you choose to use them: If you only want certain folks seeing and editing your clips, you can add them to a whitelist so only they can see it. Finally, when you're done picking out the pictures and videos you want, selecting the right theme and song to go with it (you can use your own tunes and select whatever 30-second segment you want) and you're ready to send it off, you have the choice of making it public or private, inviting specific people to do a remix or sharing it as a URL through other apps (Gmail, messaging, Twitter and so on).

I'm impressed with the app so far, even though there's plenty of room for improvement and more features (it's only in beta, after all). But I'm happy to see a once-exclusive HTC feature now spreading its wings to other Android devices. It gives HTC more exposure to people who normally choose other phone brands, not to mention that it stands a more realistic chance of attracting a decent number of active users. There are two challenges that Zoe will need to address. First is the massive popularity of other social networks; HTC may not be trying to compete with Instagram and others on a direct level, but most people don't want to add yet another social network to their already large arsenal. The other challenge is visibility: Will Zoe get top billing (or anywhere close to the top) on the Google Play Store? That alone could be a make-or-break factor for HTC's success.

The beta program will roll out today to several devices, including any device with HTC Sense 6, as well as the Nexus 5, LG G2 and G2 Pro, Samsung Galaxy S4, Galaxy S5 and Note 3. According to HTC, Zoe should be compatible with Android 4.4 smartphones when it leaves beta this fall.

In this article: hands-on, htc, htczoe, mobilepostcross, socialnetwork, socialnetworking, zoe, zoeapp
All products recommended by Engadget are selected by our editorial team, independent of our parent company. Some of our stories include affiliate links. If you buy something through one of these links, we may earn an affiliate commission.