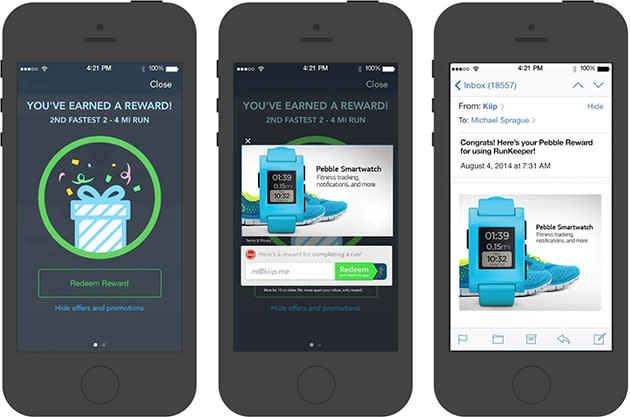 You tell yourself you're gonna go running. You might even have an app that gently prods you to get your lazy keister up off the couch. But let's be honest, the most effective motivator is the good ol' fashioned bribe. That's why RunKeeper is teaming up with Kiip, a company that delivers ads and rewards through games and mobile apps. The idea isn't just to get you casually jogging though, but to actually get you to push yourself. Through the new workout rewards program, RunKeeper will deliver discounts on Propel Water, Secret Deodorant or even a Pebble smartwatch when you reach a personal best in distance or pace for instance. All the rewards are specifically chosen to appeal to RunKeeper's athletic market niche, so you shouldn't have to worry about being offered discounts on Transformers Blu-rays. You won't get bombarded by offers either, they'll only pop up sometimes -- and you'll really have to work for them. But it might be nice to get something at the end of a long marathon than a smug sense of self satisfaction.

In this article: app, exercise, fitness, kiip, mobilepostcross, pebble, runkeeper
All products recommended by Engadget are selected by our editorial team, independent of our parent company. Some of our stories include affiliate links. If you buy something through one of these links, we may earn an affiliate commission.