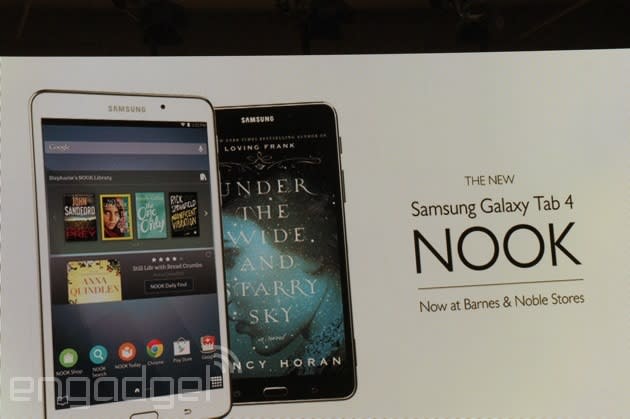 Barnes & Noble has officially kicked off a new era -- one in which it doesn't manufacture its own tablets. The struggling book outlet announced last summer that it would work with other manufacturers going forward and Samsung is first in line. The Galaxy Tab 4 Nook is the fruit of this partnership. It's a tablet built for reading first, as opposed to gaming or web browsing. While the device is undeniably Samsung, the software still retains some of that Barnes & Noble flair. Anyone who's used the previous Nook tablets will immediately recognize some of the features baked in here. The default homescreen has a widget showing recommended and recently read titles. Naturally, too, Barnes & Noble's Nook store is the primary content source, rather than the Play Store or Samsung Hub. But it's obvious that Sammy is in the driver's seat. Key features like multi-window mode are even included for some multi-tasking (say, if you want to tweet a quote from your favorite novel). B&N is pitching it as "the first full-featured Android tablet designed for reading." Then again, the company has said the same about every other Nook tablet. To be clear, it's the same hardware as the existing Galaxy Tab 4 7.0, which is to say it's exceptionally small, even for a 7-inch tablet. In fact it doesn't appear to be that much larger than your average e-reader. To give you some perspective, an executive stashed the device inside his suit pocket during an onstage demo -- something this editor would never dream of trying with a Nexus 7. All told, it's only 0.35-inch thick, so it's quite the svelte little device.

Obviously, though, content is king here. The company is including what it claims is $200 in free content with the latest Nook. You'll get copies of Freakonomics, The Wanderer, and I Am Number Four, along with trial subscriptions of Sports Illustrated and Cosmo among others. Oh, and free episodes of shows like Orphan Black and Veep. We'll be testing one out in the coming days but in the meantime, stay tuned for our hands-on post.

Update: Our hands-on post is up, complete with photos and video. Check it out here!

In this article: barnes and noble, e book, e books, e reader, e readers, e-book, e-books, e-reader, e-readers, galaxy tab 4 nook, mobilepostcross, nook, samsung
All products recommended by Engadget are selected by our editorial team, independent of our parent company. Some of our stories include affiliate links. If you buy something through one of these links, we may earn an affiliate commission.