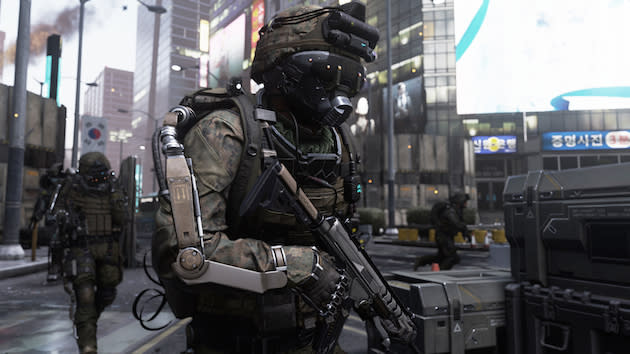 If you were looking forward to playing Call of Duty: Advanced Warfare on the Wii U this fall, well, we have some bad news. It turns out that publisher Activision has made the decision that Nintendo's latest console won't see the futuristic shooter at all. On Twitter, a fan recently asked co-founder of Sledgehammer Games, CoD:AW's developer, if the title was coming to the Wii U and Condry replied that that wasn't happening, and that his team is focused on launching for the PC, PlayStation 4 and Xbox One. "That was an Activision decision," he wrote. This is despite the fact that CoD has appeared on the Wii U for the past two years and that a version of Advanced Warfare is coming to the PlayStation 3 and Xbox 360, which are similar in horsepower to Nintendo's HD console.

This is a pretty big statement from Activision, and it echoes a similar, recent sentiment from Ubisoft: releasing Mature-rated games -- even those in blockbuster franchises -- on the Wii U isn't worth the investment required. Even though CoD historically breaks entertainment-sales records on launch day for other platforms, a vast majority of Nintendo's audience simply isn't interested.

In this article: advancedwarfare, callofduty, callofdutyadvancedwarfare, gaming, hd, hdpostcross, nintendo, WiiU
All products recommended by Engadget are selected by our editorial team, independent of our parent company. Some of our stories include affiliate links. If you buy something through one of these links, we may earn an affiliate commission.