Microsoft's acquisition of Nokia is now bearing fruit, but as often happens when big companies merge, there aren't enough jobs to go around. More than 10,000 former Nokia employees are due to be laid off by the end of the year, but their legacy will live on for a time in the Lumia 930: one of the last all-Nokia creations. If you live in the UK, then you already know where to get the flagship Windows Phone, but the more important question is whether you want one. We've already taken a deep dive on the 930 in our review of the Lumia Icon, which is essentially the same phone, just exclusive to Verizon in the US. Let's revisit the good, the bad and the competition. 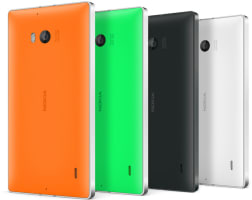 The Lumia 930 won't leave many wanting when it comes to raw specs, but it could leave the more design-focused buyer a tad underwhelmed. It's a fairly inconspicuous marriage of Gorilla Glass 3, aluminum and polycarbonate, with the latter adding a dash of Lumia color to brighten up the proceedings. If you're not a fan of Nokia's more playful, plastic-clad models, then the 930's utilitarian look might be right up your alley. The aluminum band spanning the perimeter of the phone is a nice reminder you're dealing with a top-end device that deserves a dose of premium materials. A slight pillowing of the back panel makes the 930 comfortable to hold, and with a 5-inch display, it has much more agreeable dimensions than the 6-inch Lumia 1520. The smaller device is still relatively heavy at 167g (or sturdy, depending on how you look at it), but well within most people's tolerances.

The Lumia 930 launched already running Windows Phone 8.1, but the Icon, its US doppelganger, was built before Microsoft eased up on design requirements with the release of 8.1. As a result, the 930 is probably the last phone you'll see with capacitive navigation keys and a physical camera button alongside the standard power and volume rocker arrangement. Undoubtedly, one of the best bits of the external hardware is the 5-inch display: a 1080p AMOLED ClearBlack panel nestled under a sheet of Gorilla Glass 3. It's hard to fault, what with its great sunlight readability, viewing angles and color saturation. You can check out our Windows Phone 8.1 review if you're unfamiliar with what the latest update to Microsoft's mobile OS brings, but the biggest features to note are the addition of a notification center and virtual assistant Cortana. The latter is still in beta in the UK, but that in itself means we shouldn't be far from a consumer-friendly release. Aside from the two main highlights that make for a much more competitive OS, the keyboard now supports swipe-based typing, and there are various other improvements to the core experience, like a new battery saver mode and redesigned calendar app, among others.

Being a Lumia, the 930 also reaps the benefits of Nokia's Cyan update on top of Windows Phone 8.1, which includes enhanced Camera, Creative Studio and Storyteller apps. Packing the heaviest hardware in Nokia's lineup, the 930/Icon and 1520 get some special treatment, like the Living Images photo feature that creates multi-frame moving pictures. Then there are the improvements to sound-recording quality when shooting video, as well as color temperature, low-light capture and autofocus when using the camera in general. On the imaging front, the 930 has a more-than-capable 20-megapixel PureView camera with f/2.4 aperture. It's not quite on the level of the Lumia 1020, but it's also not as inferior as the raw specs would suggest. Low-light performance is especially good, and Nokia's Camera app allows you to tweak deeper settings like white balance, ISO and shutter speed straight from the viewfinder -- things you may actually find yourself doing on a mobile with such a large sensor. While picture quality may be impressive, video is of a slightly lower standard. The overly skittish autofocus noted in our Icon review is much improved with Windows Phone 8.1, but auto-exposure compensation is still somewhat overactive. The audio that accompanies the video is basically as good as it gets, thanks to four microphones that focus on the sound in front of the lens and while canceling out what's behind it.

There's nothing negative to be said about the overall user experience. Windows Phone is designed to run smoothly on super-cheap hardware configurations, so with a 2.2GHz quad-core Snapdragon 800 and 2GB of RAM to work with, the 930 does it better than any. All that power isn't at the expense of running time, though, and the 2,420mAh battery will keep the 930 chugging along happily for at least a full day, even with intensive use. You can also juice it up wirelessly thanks to an integrated Qi coil -- every 930 comes with a wireless charger in the box, too, which isn't the case with the Icon. Incidentally, the Icon also doesn't support any form of LTE roaming, making it well and truly a Verizon-exclusive handset. The 930, on the other hand, works on bands 1, 3, 7, 8 and 20, which should take care of all needs, foreign and domestic. For now, the Lumia 930 is simply the top of the pile when it comes to Windows Phone handsets, and with flagship status comes flagship pricing. Unlocked, you can currently pick up a 930 for £395 in the UK, but search around and you'll find the Apple iPhone 5c, HTC One M8, LG G3, Samsung Galaxy S5 and Sony Xperia Z2 all within roughly £50 of that price. As Verizon called dibs on the Icon, it's unlikely we'll see US carriers ranging the 930 any time soon. That said, if you're keen on the 930's wider LTE frequency support, unlocked models are available on Amazon from around $580.

Chances are you might not want to pay up front for the handset in the UK, and should you journey the contract route, there's almost no delineation in prices across the top handsets. For around £30 per month, you're free to pick your poison. And if your poison happens to be a top-spec Windows Phone with unmatched performance, a great display and a camera that's practically as good as they get, well, prepare to get very sick indeed.
All products recommended by Engadget are selected by our editorial team, independent of our parent company. Some of our stories include affiliate links. If you buy something through one of these links, we may earn an affiliate commission.