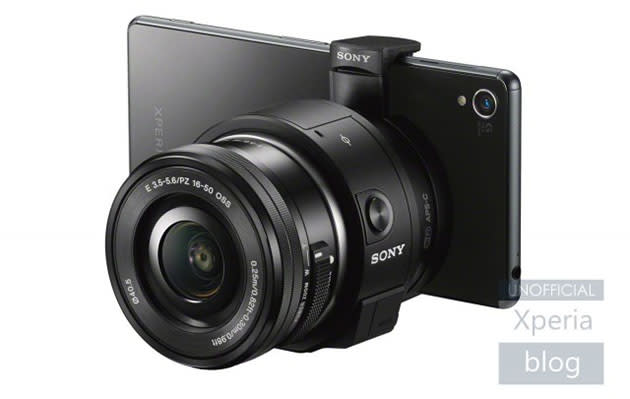 If you're looking to rule Instagram, Sony's about to give you the ultimate smartphone weapon, judging by a leak from Xperia Blog. The site posted several purported images of the Sony ILCE-QX1, a lens camera system that'd work with interchangeable E-Mount style lenses. Sony's niche-oriented lens camera lineup is currently fixed-lens only with the QX10 and QX100 models. The QX100, for instance, is based on Sony's fantastic RX100 camera and priced for serious smartphone photographers at $500. Assuming the rumor pans out, the QX1 would have an even larger APS-C (26.7mm) sensor and take compatible E-Mount lenses. There are no other specs, but as before, we'd expect that your smartphone will control the QX1 and capture images from it, with a mount that adapts to a wide variety of handsets. It'll also likely have a built-in memory card. There's no pricing yet, but as a rule, interchangeable-lens cameras are usually more expensive than fixed-lens models. Then again, Sony tends to break that rule.

Update: Oh, and yes, that phone in the images appears to be the alleged Xperia Z3 that we spotted back in July. In this article: APS-C, E-Mount, ILCE, ILCE-QX1, InterchangeableLens, LensCamera, QX1, sony, xperiaz3
All products recommended by Engadget are selected by our editorial team, independent of our parent company. Some of our stories include affiliate links. If you buy something through one of these links, we may earn an affiliate commission.