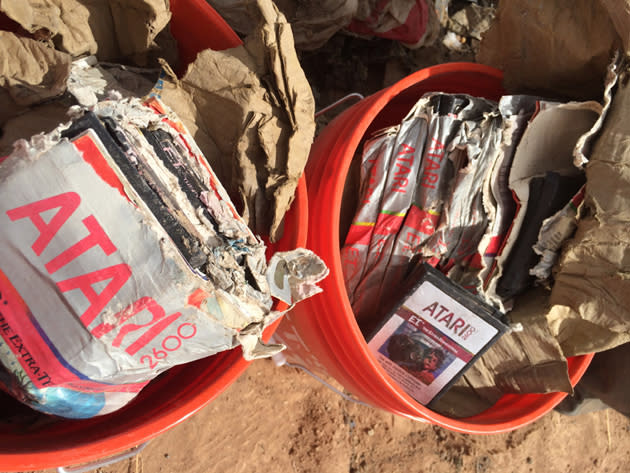 It would seem that the saga of Atari's video-game mass grave in New Mexico is coming to a close. The Alamogordo City council has voted unanimously to auction off half of the recovered cartridges (around 800 of 'em, according to Reuters). Interested in owning a piece of history? Eurogamer says that we should see the items -- a likely majority of which will be E.T. -- pop up on eBay and the council's website within the next few weeks. Of the remaining carts, the city plans to keep 500 of them and the rest will be donated to museums. If you still can't get enough of the tale, there's always the upcoming Microsoft-backed documentary and our own interview with E.T.'s sole developer, Howard Scott Warshaw. The move to sell these to the highest bidder instead of at a fixed price is a pretty clear indication that city is being a bit opportunistic and taking advantage of nostalgia, if you ask us -- something that probably rubbed off from Atari itself.

In this article: alamogordo, Atari, ataridig, e.t., excavation, gaming, hd, hdpostcross, NewMexico
All products recommended by Engadget are selected by our editorial team, independent of our parent company. Some of our stories include affiliate links. If you buy something through one of these links, we may earn an affiliate commission.